A national network of young journalists and artists collaborating with peers across the country and top media professional to create impactful content.

We are YR Media, a national network of young journalists and artists. We collaborate with our peers around the country and top media professionals to create content that matters.

For 25 years, our non-profit production company has invested in future generations ? championing our voices, and those before us ? to build critical skills in journalism, arts and media.

If you are a student, a young artist or writer, an activist, a parent, a teacher, or someone who believes in the power of this generation, you are in the right place. Hang out and explore our reporting and creative content on politics, identity and rising artists.

We sometimes link up with outlets like Teen Vogue, NPR, Pandora, and NYTimes to further amplify our work. Over the years, we have won a lot of awards. 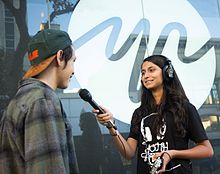 YR Media (formerly Youth Radio) is a national network of young journalists and artists collaborating with peers across the country and top media professional to create impactful content. YR Media has operated as a non-profit production company in the Bay Area for 25 years, starting in Berkeley, CA and moving to downtown Oakland, CA in 2007. YR was founded by Ellin O'Leary. O' Leary founded Youth Radio in 1992 and served as its first Executive Director. YR invests in future generations by championing the voices of young people and helping build crucial skills in journalism, arts and media.

YR has partnered with outlets including Teen Vogue, NPR, Pandora, and NYTimes to further amplify the work of young journalists and artists, and their work has been recognized by awards including the George Foster Peabody Award, Edward R. Murrow Award, and Alfred I. duPont-Columbia University Award.

YR Media’s mission is to launch young people on education and career pathways in media, technology and creative arts. More than 75% of the high school students they serve each year are low-income or from communities of color. Many are from failing schools.

Founded in 1993 in Berkeley during a period of heightened youth violence and homicide, Youth Radio was established as an outlet for Bay Area youth to process their experiences and provide an alternative perspective to the prevailing media dialogue. In 2007, Youth Radio moved its headquarters to downtown Oakland, helping transform an under-invested part of the city into a world-class center of art, commerce, and culture. In 2012, Youth Radio reported on the importance of the youth vote at the Democratic National Convention in Charlotte, North Carolina.

Youth Radio operates bureaus in Los Angeles, Atlanta, and Washington, D.C. The flagship of Youth Radio is located in downtown Oakland on Broadway and 17th street.

Adult ISH: A first-of-its-kind, culture, storytelling and advice podcast produced by those who are almost adults. 24-year-olds Nyge Turner (Oakland) and Merk Nguyen (Los Angeles) host conversations with artists, tastemakers and theirs friends about mental health, culture, and more.[5]