Worker’s Justice Project (WJP) is a Brooklyn-based worker center addressing racial and economic injustice that day laborers and domestic workers face by building collective power and creating solutions to the problems our members experience at work and in communities where they live. WJP has a growing a membership based that is building power to win protection, adopt, enforce community labor standards and transform exploitative labor practices in unregulated industries such as construction and house cleaning.

Our mission is to empower low-wage immigrant workers to gain a voice in the workplace and build strong and economically sustainable communities through education, organizing, leadership development, and the growth of grassroots economic alternatives.

Our main goals are to change the conditions that lead to exploitation, to strengthen the grassroots base of the labor movement, and to create grassroots economic alternatives.

We pursue our goals through advocacy, grassroots organizing, education and training, creative expression, and by working in a coalition with allies that support our common objectives.

The World Justice Project (WJP) is an international civil society organization with the stated mission of "working to advance the rule of law around the world".[1]

The WJP works through three programs — Research and Scholarship, the WJP Rule of Law Index, and Engagement. WJP seeks to increase public awareness about the foundational importance of the rule of law, stimulate government reforms, and develop practical programs at the community level.

It was founded by William H. Neukom in 2006 as a presidential initiative of the American Bar Association and with the support of 21 partners.[2] The World Justice Project became an independent 501(c)(3) non-profit organization in 2009. Its offices are located in Washington, D.C., and Seattle, Washington.[3]

WJP definition of rule of law

The World Justice Project defines the rule of law system as one in which the following four universal principles are upheld: 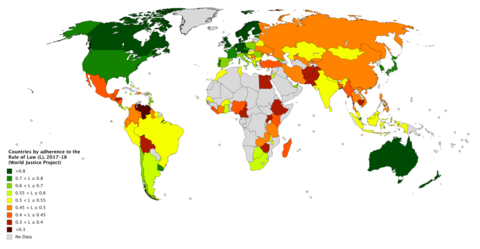 The World Justice Project Rule of Law Index is a quantitative assessment tool designed to offer a detailed and comprehensive picture of the extent to which countries adhere to the rule of law in practice. The Index provides data on eight dimensions of the rule of law: limited government powers; absence of corruption; order and security; fundamental rights; open government; regulatory enforcement; civil justice; and criminal justice. These factors are further disaggregated into forty-four indicators. Together, they provide a comprehensive picture of rule of law compliance.[6] The index is typically published annually.[7]

The Index rankings and scores are built from over 400 variables drawn from two new data sources: (i) a general population poll (GPP), designed by the WJP and conducted by leading local polling companies using a probability sample of 1,000 respondents in the three largest cities of each country; and (ii) a qualified respondents' questionnaire (QRQ) completed by in-country experts in civil and commercial law, criminal law, labor law, and public health. To date, over 97,000 people and 2,500 experts have been interviewed in 99 countries and jurisdictions.[8] Adherence to the rule of law is assessed using 47 indicators organized around eight themes: constraints on government powers, absence of corruption, open government, fundamental rights, order and security, regulatory enforcement, civil justice, and criminal justice. In addition to country scores and rankings, the Index also includes key global findings as well as an analysis of regional strengths, rule of law challenges, best and worst performers, and trends to watch.[9]

Data from the WJP Rule of Law Index is used as an indicator of political and legal freedom in the , a money laundering risk assessment tool developed by the Basel Institute on Governance.

Since its founding in 2006, the WJP has helped give people in countries around the world greater understanding of the rule of law and with it, greater opportunities in nearly every part of their lives – from education, to health care, to property rights to fair and peaceful resolution of disputes. The WJP's Engagement initiatives strive to make rule of law advancement as fundamental to the thinking and work of other professionals as it is to lawyers and judges.

The World Justice Challenge is an open competition designed to incubate practical, on-the-ground programs that advance the rule of law.[11] Selected programs will be supported by:

The World Justice Forum is the world's largest global multidisciplinary platform dedicated to advancing the rule of law. It is a global gathering at which prominent leaders from all parts of the world and a variety of disciplines come together to articulate how the rule of law affects their disciplines and regions and to develop collaborative actions to strengthen the rule of law.[12]

The World Justice Project convened a small taskforce of Tunisian leaders from business, government and civil society in Tunis, Tunisia, on May 28, 2012, to assess rule of law opportunities and challenges facing Tunisia during the ongoing reform process. The WJP worked closely with the World Federation of Engineering Organizations (WFEO), the Arab Center for the Rule of Law and Integrity (ACRLI), and the Hague Institute for the Internationalisation of Law (HiiL) in the planning and execution of the Tunisia workshop. It produced a detailed report on the rule of law situation in Tunisia based on data from its Rule of Law Index.[13] The WJP is also considering organizing additional workshops in the future for countries undergoing transition.[12]

The World Justice Project's board of directors includes:

The World Justice Project has the following board officers: