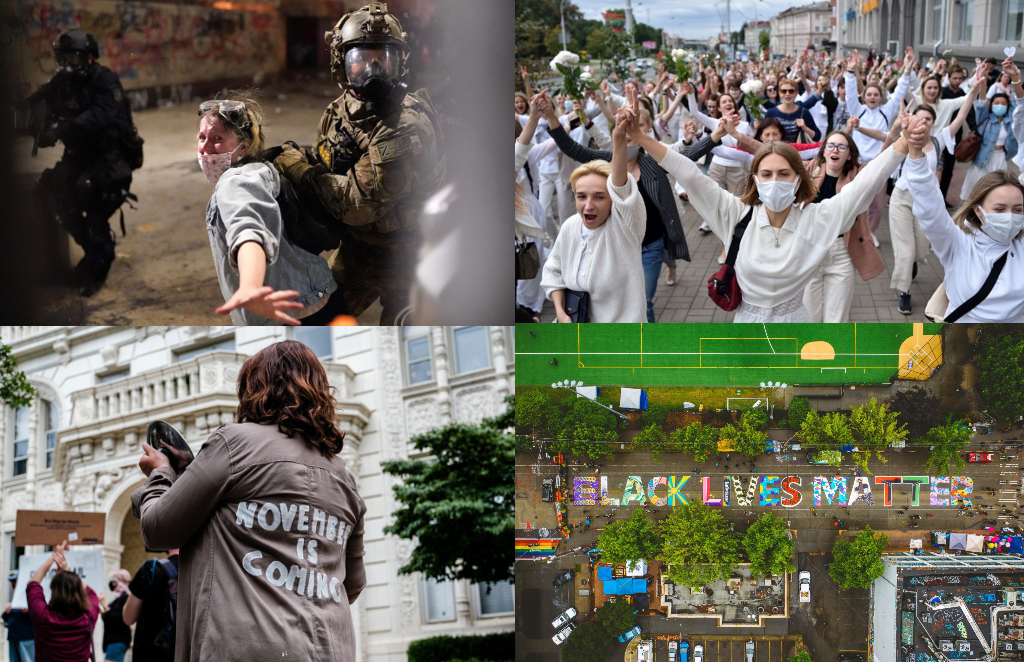 Not surprisingly, the list is dominated by our early, groundbreaking analysis of how to stop a coup and mobilize around the pandemic to push for transformative social change. In any other year, you might see the more diverse array of issues and regions we cover. So to remedy that, we are including a second list (chosen by us) encompassing our other top stories of 2020 — ranging from Black Lives Matter to climate action to international struggles.

As you go through the lists, please be aware that support from readers like you is what makes these stories possible. If we are going to have another year where we produce early, groundbreaking analysis of the movements and issues shaping our world we need to reach our $15,000 end-of-year fundraising goal. Right now, we are still $5,600 short. So, please make a one-time donation or become a sustaining member today. Both options are tax deductible.

10. We need to build a movement that heals our nation’s traumas
By Kazu Haga
If we don’t have an unwavering commitment to healing as we mobilize this election season, we will always be in crisis.

9. What will it take to defend the election? Here’s one winning strategy
By George Lakey
A knee-jerk protest won’t stop a Trump power grab. It’s going to take several clear, do-able strategies that together enable us to win.

8. Inside the battle for Portland with the independent journalists on the streets
By Shane Burley
As federal agents snatch protesters in unmarked vans, the reporters covering the Portland uprising are facing intense and unprecedented repression.

7. Coronavirus is a historic trigger event — and it needs a movement to respond
By Paul Engler
Even in times of social distancing, building a collective, social response to the pandemic is our only salvation.

6. HOLY SH*T! 7 things to do instead of hoarding toilet paper
By Rae Abileah and Nadine Bloch
Beautiful Trouble’s irreverent guide to activism in the time of pandemic

5. Mass direct action might be the only way to stop Trump from stealing the election
By George Lakey
The more quickly we nonviolently disrupt Trump’s plans — at scale — the less longer-term disruption to our country and our lives.

4. What’s the game plan if Trump really does try to steal the election? 7 tactics to stop a coup
By Daniel Hunter
As coup prevention has gained mainstream attention, here’s a series of tactics with a plan to defend our democracy.

3. Understanding Trump’s game plan in Portland could be the key to preventing a coup in November
By George Lakey
Defeating Trump’s “law and order” strategy will mean creating a plan to win based on our strengths and his weaknesses.

2. We need a plan to prevent a Trump takeover — and this anti-coup research shows the way
By George Lakey
By studying the research that shows how other countries have handled coup attempts, we can better counter or even prevent one of our own.

1. 10 things you need to know to stop a coup
By Daniel Hunter
While keeping people focused on a strong, robust election process is a must, we also need to prepare for a coup.

Nigeria’s #EndSARS movement has suspended protests, but vows to come back stronger | By Immanuel James Ibe-Anyanwu

As the smoke subsides, West Coast climate activists show what an effective response looks like | By Nick Engelfried

In a time of unprecedented protest, Belarus’ uprising is exceptional | By Inna Shevchenko

When workers at Barnes & Noble got sick, we organized our warehouse and won | By Elsa Rodriguez Flores