Will President-elect Biden Protect the Amazon and Stop the Money Pipeline? 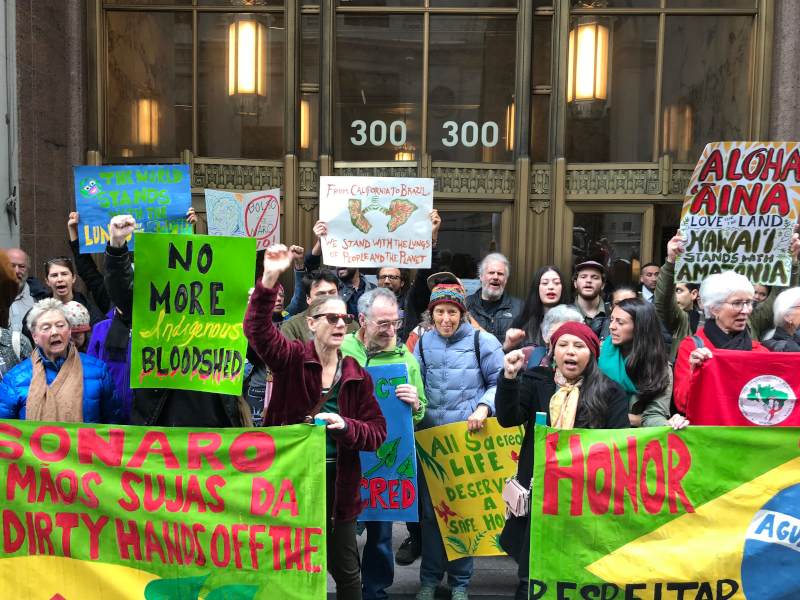 President-elect Joe Biden managed to turn out a significant progressive base to secure the 2020 presidential election. For many voters, his commitments to address environmental and racial justice after several years of actions, protests, and calls from activists led to grassroots mobilizations that delivered the presidency and flipped a few states to the Democratic party. With this mandate, a Biden-Harris administration should take bold steps to address the causes of climate change and its impacts on frontline communities both here in the U.S. and in places like the Amazon, where U.S. companies operate and provide financing. Climate activists have long been ignored or dismissed by congressional leadership. This new administration would be wise to listen and enact policies demanded by the base that elected them.

In addition to committing to re-enter the Paris Agreement, Biden has specifically mentioned the importance of protecting the Amazon, threatening “significant economic consequences” for the Bolsonaro administration if it does not stop destroying the rainforest for profit.

As Biden moves to select his cabinet, Amazon Watch will be joining ally climate groups, such as the Stop the Money Pipeline coalition to hold the new administration accountable for implementing key changes that will center climate mitigation across policy areas. Climate change poses not only environmental but also social and economic risks. As such, it must be addressed in policy areas beyond the traditional scope of environmental regulation; regulation of the finance industry is especially critical.

Activists have outlined a number of ways that a Biden administration can have a tangible impact on mitigating climate change with or without Senate control, and they will continue to keep the pressure on Wall Street to make changes to investment practices in order to center sustainability, human rights, and the protection of vital biomes like the Amazon rainforest. Recognizing that whoever holds key positions in the government will help determine policy, the Stop the Money Pipeline coalition has also just released criteria that any Biden appointees working in financial regulatory agencies should meet.

A Biden presidency is a hopeful step in the direction of climate action because it presents an opportunity to develop stronger regulation of the finance industry. As detailed in a recently published Amazon Watch and APIB report Complicity in Destruction III, several Wall Street behemoths (including JPMorgan Chase, BlackRock, and Bank of America) are financing companies that have been linked with Indigenous rights violations throughout the Amazon. Increased regulation of the finance industry would make ongoing fossil fuel and deforestation commodity investments in the Amazon even riskier ventures.

Amazon Watch and allies at Artists for Amazonia have outlined further steps that must be taken to protect the biome in an Amazon Climate Platform. The platform calls for all financial institutions to remove deforestation commodity and fossil fuel companies from their investment portfolios, as well as from the supply chains of all companies they invest in. In cutting out fossil fuels and deforestation, financial institutions must also prioritize the rights of Indigenous peoples to Free, Prior, and Informed Consent (FPIC), as well as the safety and defense of environmental activists and leaders, who face deadly threats in the Amazon (according to Global Witness, almost 90 percent of attacks on human rights and environmental defenders in Brazil in 2019 took place in the rainforest).

Ending investment in the industrial activities that are harming our climate is an essential step to take if we are to address the climate crisis. At the same time, Wall Street and a new Biden administration must also push for greater investment in the conservation, restoration, and reforestation of biodiverse regions. Finally, it is of the utmost importance that any and all policies implemented in the Amazon be made in collaboration with Indigenous leadership and environmental scientists.

Of course, stronger regulation of the finance industry is just one part of the strategy to protect the Amazon and our climate. Amazon Watch, our Indigenous partners, and grassroots allies will complement the push for stronger financial regulation with continued advocacy campaigns and strong on-the-ground mobilizations that target key culprits. We will be watching closely to ensure that a new Biden administration stays true to the promises made on the campaign trail, and that it holds financiers accountable for keeping our climate livable.