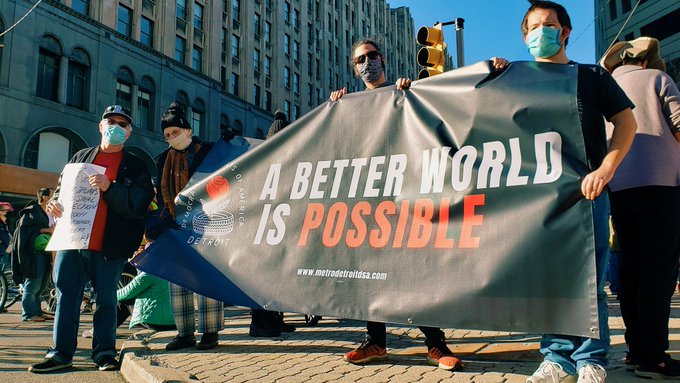 A member of YDSA’s leadership weighs in on what the drawn-out election will mean and how we should proceed.

From what we know of the Election Night results so far, two things stand out: first, the terribly undemocratic nature of our political system; and second, the utter failure of the Democratic Party to address the depth of the crisis we’re in.

At the time I’m writing this, the day after Election Day, Biden is leading in the popular vote with 72 million votes against Trump’s 68 million. We’re still waiting for all the votes to be counted in a few very close states: North Carolina, Georgia, Nevada, and Arizona. So far, vote totals in Pennsylvania favor Trump by a fair margin, but as mail-in ballots (which heavily favor Biden), continue to be counted, the state could easily swing Democratic.

In a truly democratic system, we would already be able to declare Biden the indisputable winner. Instead, we’re left wondering or not Biden will be able to claim victory in five states where the full votes remain to be counted, whether or not Trump will continue to challenge the results and claim that Democrats are “stealing the election,” whether or not 2020 will become the third presidential election out of the past five where a right-wing candidate who lost the popular vote is declared the winner.

The most urgent task for us in these next few days is to demand that all the votes be counted. An unprecedented 101 million people voted before Election Day, using mail-in ballots or early in-person voting. Since Biden encouraged his supporters to vote by mail, while Trump did the opposite, the mail-in ballots leaned heavily Democratic. (One example: in my home state of Ohio, mail-in and early voting results went for Biden by a 10% margin, but as soon as election-night vote totals were factored in, this changed to an 8% lead for Trump.)

It’s no surprise, then, that Trump has been trying to challenge the validity of mail-in ballots for months before the start of Election Day. He has repeatedly claimed that counting votes after Election Day is “fraud,” and Republicans have already been issuing legal challenges to try to invalidate mail-in ballots in key states like Pennsylvania. These maneuvers have given rise to fears of another Republican judicial coup, with Pennsylvania playing the role of Florida in Bush v. Gore.

In 2000, the Democratic Party discouraged its own base from mobilizing in support of democracy because they did not want to appear as though they did not have faith in the legal system. To protest was, on some level, to acknowledge the deeply undemocratic nature of institutions like the Electoral College and the Supreme Court. In the end, defending the legitimacy of those institutions was more important to the Democratic Party than defending the results of an election they had won.

That’s why, this time around, socialists must be at the forefront of the fight for the most basic of democratic rights: for every vote to be counted. YDSA members should join or help organize mobilizations through coalitions like Protect the Results and through their local DSA chapter, and circulate pledges to grow and organize their membership.

We should also look to the power of political strikes in strategic sectors, using the organizing of flight attendants against Trump’s Muslim Ban, family separation policies, and the federal shutdown as a model. This is the only way we can leverage the structural power of the working class in the event that Trump tries to steal the election, and as socialists we should contribute to those labor struggles in whatever way we can.

Just as crucially, taking part in this struggle to defend the results will allow us to highlight the ways in which this status quo is already thoroughly undemocratic and how socialism is the only political force capable of bringing about true democracy. Our immediate demand is to count all votes, but unlike the Democratic Party, we also have a vision for democratizing the political system in the long term: we want voting rights to be extended to everyone living in the U.S. who is currently disenfranchised, including incarcerated and formerly incarcerated people, non-citizens and undocumented people, and all the working-class people who are subject to widespread voter suppression. We want to change our political system so that the principle of “one person, one vote” really holds true, rather than propping up institutions created by slaveowners, like the Senate, that give a disproportionate share of the vote to white and wealthy voters.

More than that, we are fighting for a vision of society in which all people have a say in their living and working conditions every day of their lives, rather than just a highly constricted set of choices every two or four years. We are fighting for economic democracy as well as political democracy. This is a continual battle we will have to wage in workplaces across the country for the next four years and beyond—regardless of whether Biden or Trump is in the White House.

An alternative to neoliberalism

This brings me to what I think is the most important takeaway from Election Night: the urgent need to fight for an alternative to the kind of neoliberal austerity politics that Biden represents. The fact that the election results were so close to begin with signals a continued failure of the Democratic Party to offer anything substantial to the vast majority of working-class people.

On Election Day, numerous states set records for new COVID-19 cases, and the overall death toll neared a quarter million. We are still in the midst of the worst economic crisis of our lifetimes with over 20 million people unemployed. Meanwhile, the federal government refuses to offer even the most basic relief measures for the working class in the form of a $2000 monthly stipend, emergency Medicare for All, expanded unemployment benefits, debt cancellation, and rent cancellation.

The choice between Trump and Biden presented voters with two stark options: reopen the economy and let the vulnerable die; or continue lockdown with only a limited hope of economic relief. It shouldn’t come as any surprise that voters were so divided on this question when no better alternative was being put forward.

Now imagine how things might’ve gone differently if Biden had championed the kinds of policies that Bernie Sanders has been fighting for since the start of the pandemic. We could have cut through the misleading dichotomy between “protecting the economy” on one hand, and saving lives on the other. We could have shaped class consciousness by highlighting all the ways that the working class has been left to suffer in this crisis while the billionaires increase their wealth. Instead, the Biden campaign, like Hillary Clinton’s campaign before it, focused on a narrow message of attacking Trump and restoring “decency” and “normality.”

But in a crisis like this, nothing would be worse than a return to normality. What we need is precisely what the Bernie campaign called for: a political revolution. The Bernie campaign was able to build such a broad multiracial coalition of the working class precisely because it appealed to people’s sense that there is an urgent need for some kind of fundamental change. Now, with the possibility of a class-struggle-oriented presidency off the table, we have to figure out how best to fight for transformative reforms like Medicare for All, a Green New Deal, College for All, and defunding the police in the context of a neoliberal Biden presidency.

We shouldn’t understate how difficult this will be. For the past few months Biden has been trying to match Trump’s right-wing rhetoric when it comes to support for U.S. imperialism and the police, even in the midst of a massive protest movement to defund the police; he has been vocal in his opposition to Medicare for All even as the death tolls from COVID-19 surge, and in his support for fracking even as wildfires engulfed the West Coast; he has tried to distance himself at every turn from almost everything that socialists stand for.

Can we build up the kind of independent strength and organization necessary to force him to reverse that trajectory? Possibly. But it’s by no means guaranteed.

All of that being said, however, there are considerable glimmers of hope, even in the midst of Election Night despair. DSA-endorsed candidates won 28 out of 37 national races and 8 out of 9 major ballot initiatives. DSA members like Cori Bush and Jamaal Bowman have joined AOC and Rashida Tlaib in Congress, and we’ve won major local victories such as universal preschool, tenant protections, and a $15 minimum wage.

These electoral wins are a reflection of how much DSA has grown in the past four years. In November 2016, DSA was still a small, relatively marginal force, with only 8,000 members, despite the recent boost from the Bernie primary campaign. Now, DSA has exploded into the third-largest socialist organization in U.S. history with 78,000 members, 7,600 of whom joined only this past month.

The growth of DSA, in turn, has been a reflection of an overall uptick in class consciousness and class struggle over the past few years. We’ve seen this, for instance, in the rise of a mass movement against racial oppression and policing this past summer, which represented the largest wave of protests in U.S. history, involving between 15 and 26 million people. Labor militancy has increased considerably in the last four years as well, as the 2018 strike wave attested—half a million workers went on strike that year, more than any time since the Reagan presidency.

The potential for building a mass socialist movement rooted in the power of the multiracial working class is clear — far clearer than it’s been at any other point in our lifetimes. But we won’t see that potential actualized anytime soon unless we continue to organize, continue to bring more and more people into our movement.

Above all, what this election has shown is the urgent need to realign U.S. politics along class lines. So long as white supremacy and nationalism continues to divide the working class, so long as the partisan divide of “red states” vs. “blue states” continues to conceal the more fundamental divide between workers and the capitalist class, we won’t be able to win the kind of alternative we desperately need.

The only way we can bring about that realignment is by winning over masses of people to the idea that a better world is possible, and that socialism is how we will achieve it. In order to do that we will need to continue to grow DSA; continue running electoral and legislative campaigns around key reforms like Medicare for All, the Green New Deal, and defunding the police; and finally, work towards rebuilding the labor movement, and restoring its ties to the socialist movement.

We can only do these things if we organize together. We need to be prepared to fight now to protect what little democracy we have, and to keep on fighting to bring about the much fuller democracy that our vision for a socialist society represents. We will need to carry on this fight just as much under Biden as under Trump.

There’s no better time to join DSA and be part of that struggle—or, if you’re already a member, to organize others to join. YDSA and DSA chapters around the country are getting ready to carry on the struggle against white supremacist, authoritarian politics and neoliberal austerity alike, from the local to the state to the national level, from the ballot box to the streets to our workplaces.

The political revolution isn’t over. It’s only just beginning.

What do you think the results of the election mean? YDSA members: we want to hear from you! Find out how to submit your work to The Activist here.

Want to support The Activist and help build a mass working-class movement by and for student socialists? Become a YDSA member today!