The Commonwealth Club of California

The nation’s oldest and largest public affairs forum. Each year, we bring nearly 500 events on topics ranging across politics, culture, society and the economy to more than 25,000 members and the public.

With the sound of a gavel striking three times, another Commonwealth Club program begins, bringing together audiences with fascinating, intriguing and entertaining individuals.

The Commonwealth Club of California is the nation’s oldest and largest public affairs forum. Every year, we present more than 450 forums on topics ranging across politics, culture, society and the economy.

The Club has offices in San Francisco and Silicon Valley, with regular events in both areas, as well as programs in Lafayette in the East Bay and in Marin County.

For audiences outside the Bay Area, the Club’s weekly radio broadcast?the oldest in the United States, dating back to 1924?is carried across the nation on more than 230 public and commercial radio stations. Our programs are widely podcast and video broadcast. Our website archive features audio and video of our recent programs, as well as selected speeches from our long and distinguished history.

Our Mission
The mission of The Commonwealth Club of California is to be the leading national forum open to all for the impartial discussion of public issues important to the membership, community and nation.

Our Speakers
Since its founding in 1903, The Commonwealth Club has played host to a diverse and distinctive array of speakers, from Teddy Roosevelt to House Speaker Nancy Pelosi, California Governor Jerry Brown, political commentator David Brooks and environmental advocate Jane Goodall. Martin Luther King Jr., Ronald Reagan, Bill Clinton and Bill Gates have all given landmark speeches at the Club.

The Commonwealth Club of California is a non-profit, non-partisan educational organization based in Northern California. Founded in 1903, it is the oldest and largest public affairs forum in the United States.[1] Membership is open to everyone.

The Commonwealth Club has over 20,000 members and organizes nearly 500 programs each year on topics ranging across politics, culture, society, and the economy. Around 100,000 people attend these events in person annually. The Club has 56 employees and an annual budget of $11.5 million. It is currently headed by an expert on international security and arms negotiations, former Pentagon official and businesswoman, Dr. Gloria Duffy. Club events are broadcast on many public and commercial radio stations in the longest-lasting continuous radio program in the nation.[2] Recordings of these programs are deposited at Stanford University's Hoover Institution Archives.[3]

The club has radio broadcast its fora since 1924, and current broadcasts are carried weekly by about 230 public and commercial radio stations across the nation. Local residents in the Bay Area can view televised programs from The Club on KGO TV, and the Club live streams or archives video of its programs on Facebook[4] and YouTube[5] as well as posting them on the Club's website. The club's podcast is at iTunes[6] and on the club's website and a bi-monthly magazine, The Commonwealth, is available to club members.

In addition to hosting speeches and panels, in the late 1990s the club resumed its early role initiating public policy projects. These have included Voices of Reform, a nonpartisan effort to bring together California's policy makers and opinion leaders to improve state governance. Voices of Reform became the independent organization California Forward. Similarly, the club's California Media Project merged into California Watch, part of the Center for Investigative Reporting.

The club also offers travel programs, with educational trips abroad each year to destinations such as Turkey, Southeast Asia, and Iran.

The Commonwealth Club occasionally comes under criticism from people who think it represents one or another political philosophy, and they often center upon criticism of specific speakers with whom the critics disagree. But the club's more than 400 events a year feature speakers from a wide range of viewpoints—conservative and liberal and moderate and radical, religious and secular, pro-Israeli and pro-Palestinian.

The Commonwealth Club sponsors the California Book Awards, which were initiated in 1931 to honor "exceptional literary merit of California writers and publishers". The California Book Awards are funded by an endowment from Dr. Martha Heasley Cox, late Professor of American Literature at San Jose State University. Medals (gold and silver) and cash prizes are currently awarded in the categories of Fiction, Nonfiction, Poetry, First Work of Fiction, Californiana (fiction or nonfiction relating to California), Juvenile Literature (up to age 10), Young Adult Literature (age 11–16), and Notable Contribution to Publishing. The winning books are selected by an independent jury.[7]

The Commonwealth Club was founded in 1903 by Edward F. Adams, the Agricultural Editor at the San Francisco Chronicle newspaper. At its first meeting, Adams read a paper now regarded as the founding document of the club, in which he wrote "I have no fear of lack of following so long as it is self-evident that we only propose to find truth and turn it loose in the world[8]

Presidents of the club in the second half of the 20th century included actress and Ambassador Shirley Temple Black, California Supreme Court Justice Ming Chin, and UCSF Chancellor Julius Krevans. Club members include prominent national leaders like former Secretary of State George Shultz and former Defense Secretary William Perry, as well as citizens from professions such as business, law, medicine, teaching, the arts, technology and journalism.

The club has hosted numerous world-class speakers including many U.S. presidents and other major political leaders in the United States and abroad, business leaders, and influential social activists. Speakers receive no honoraria.

In 2002, The Commonwealth Club launched Inforum, dedicated to serving the needs of people in their 20s and 30s interested in non-partisan public affairs. In 2007, the Club created Climate One to bring together academics, industry, and activists on all sides of energy and climate change issues for discussion and planning.

In September 2017, the Club celebrated the opening of its first owned headquarters, a 24,000 square ft, $33 million building, on the San Francisco waterfront at 110 The Embarcadero.[10] The building was designed by Leddy Maytum Stacy, a San Francisco architectural firm and winner of the American Institute of Architects 2017 Firm Award.[11] The building is specifically designed to be a civic forum, with auditoriums, the Meyer Sound Constellation system, Copper Loop hearing technology, informal conversation areas, audio-video production facilities, digital information screens and other unique elements to serve the Club's mission. It is also a historic restoration of a building that was the first headquarters of the International Longshoremen's Union. The Club's HQ is environmentally sustainable, with features including cooling with outside air, paneling with wood reclaimed from the original building on the site, LED lighting and tile and carpeting with recycled content. It is also located close to public transit facilities serving the Bay Area.

The list of notable speakers and speeches numbers in the thousands and includes domestic and foreign political and military leaders, Nobel prize-winning scientists, authors, activists, and artists. A book of important club speeches, Each a Mighty Voice, was published in 2004 by Heyday Books. 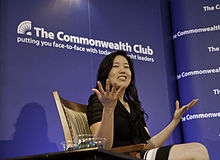 Growing out of Study Sections that were formed in the club's early days, today the club has fifteen ongoing member-led fora, each of which meets frequently to host speakers and engage in discussion on topics including the arts, bay gourmet (food and wine), Asia-Pacific affairs, business and leadership, environment and natural resources, grownups (second half of life issues), health and medicine, humanities, international relations, LGBT issues, the Middle East, personal growth, psychology, and science and technology.

An intensive look at a single subject is sponsored each August through the Club's Platforum, where events are held daily throughout the month on the topic, examined from the perspective of many different fields. Annual Platforum topics have included China Rising (2006), Cool Clear Water (2007), How We Eat (2008), For Richer, for Poorer: Surviving and Thriving in the Great Recession (2009), and The Ascent of Woman (2010). The Platforum series include not just lectures and discussions, but often meals, travel, and experiential learning such as kayaking on San Francisco Bay (Cool Clear Water).

Inforum is the Club's division for younger community members. Since its founding in 2002 Inforum has engaged a new generation in civic discussion through its lively and controversial programming.[12] 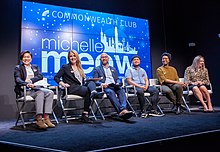 Michelle Meow hosts a panel discussion at the Commonwealth Club in January 2020.

Over the years a number of issues have been studied in depth by club leaders, member committees, or scholars commissioned by the Commonwealth Club. Among the topics studied have been direct democracy (the initiative process), air pollution, a statewide water plan, restrictions on child labor, automobile and industrial accident compensation, and legislative procedures. The long-standing mandate of many such studies has been "to investigate and discuss problems affecting the welfare of the Commonwealth and to aid in their solution." Many policy innovations in California—such as public defenders' offices and a printed voter explanation booklet to go with ballots—originated in studies and discussions at the Commonwealth Club.[citation needed]

One of the most extensive of these studies was commissioned in 1953 and lasted until 1956. It resulted in the book California Social Welfare: Legislation, Financing, Services, Statistics published by Prentice-Hall. Vaughn Davis Bornet, a recent Ph.D. recipient from Stanford University at the time, authored the book.

The Club produced "Final Choice", a documentary that aired on PBS in 1998. It followed the families of three terminally ill individuals and explored the issue of physician-assisted suicide.

From 2003 to 2007, the project "Voices of Reform" examined the need for improvements in state governance in California. VOR lead to the establishment in 2008 of the independent reform organization California Forward.[citation needed]

In 2018, the club teamed up with LGBTQ radio and TV host to host her daily radio show before a live audience one day each week. Guests on The Michelle Meow Show at The Commonwealth Club have included Black Lives Matter co-founder Alicia Garza, scientist and educator Tam O'Shaughnessy (life partner of astronaut Sally Ride), Katie Sowers (the first out LGBTQ coach in the NFL), The X-Factor finalist Jason Brock, comedian Sampson McCormick, Olympic skater Adam Rippon, and others.

Because the club is strictly non-partisan and does not take positions on issues, when a project matures to the point that policy prescriptions are being considered, as in the case of Voices of Reform, the club assists the project to become a separate entity from the club itself.