Stand Up To Cancer

Offering the newest, most effective, and most promising cancer treatments to patients quickly.

Stand Up To Cancer’s (SU2C) mission is to raise funds to accelerate the pace of groundbreaking translational research that can get new therapies to patients quickly and save lives now.

SU2C brings together the best and the brightest researchers and mandates collaboration among the cancer community. By galvanizing the entertainment industry, SU2C has set out to generate awareness, educate the public on cancer prevention, and help more people diagnosed with cancer become long-term survivors.

Stand Up to Cancer

Stand Up To Cancer (SU2C) is a charitable program of the Entertainment Industry Foundation (EIF). SU2C aims to raise significant funds for translational cancer research through online and televised efforts. Central to the program is a telethon that was first televised by four major broadcast networks (ABC, NBC, CBS, Fox) in over 170 countries on September 5, 2008. SU2C raised over $100 million after that evening's broadcast.[1] Funds collected by Stand Up To Cancer are then distributed by the American Association for Cancer Research.[2]

Stand Up To Cancer was conceived of in autumn 2007, by a group of women who had been affected by cancer and believe that by merging the recourse of the media and entertainment industries into a single operation they would be able to fight against this disease in a more profound way.[3]

Stand Up To Cancer was formally launched on May 27, 2008. Current members of the SU2C Council of Founders and Advisors (CFA) include Katie Couric, Sherry Lansing, Kathleen Lobb, Lisa Paulsen, Rusty Robertson, Sue Schwartz, Pamela Oas Williams, and Ellen Ziffren.[4] All current members of the CFA were co-producers of the 2012 televised special. The late co-founder Laura Ziskin executive produced both the September 5, 2008 and September 10, 2010 broadcasts. Sung Poblete, Ph.D., R.N., has served as SU2C’s president and CEO since 2011. In the United Kingdom, Channel 4, along with Cancer Research UK, launched its own version of Stand Up To Cancer in October 2012, which has continued every year since.[5]

Stand Up To Cancer aims to raise awareness and bring about an understanding that everyone is connected to cancer. The statistic used most often by SU2C is from the American Cancer Society: one out of every two men and one out of every three women will be diagnosed with cancer in their lifetime,[6] meaning everyone is affected in some way, or will be.

The campaign has featured televised moments during World Series baseball games where fans literally "stand up to cancer" by rising and holding signs inscribed with the names of friends and loved ones who have struggled with the disease.[7]

SU2C has donated hundreds of millions of dollars since the first "Dream Team" was organized in 2009. The "Dream Teams" funded by SU2C brings researchers together from institutions and universities across the world and have been among the most productive collaborations in getting new drugs to market and many teams are funded jointly with other cancer research organizations. The research is required to be translational and include laboratory and clinical members and cannot involve more than one principal investigator from each institution.[8][9] Many of these dream teams are co-sponsored by other cancer-related foundations.

Led by , Stephen B. Baylin 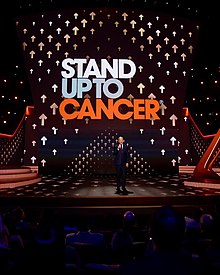 Joe Biden speaking during the 2016 Stand Up to Cancer fundraiser.

Six telethons have been broadcast in the United States and are made available to more than 190 countries. To date, more than $603 million[11] has been pledged to support SU2C’s innovative cancer research programs.

In Canada, the 2014 telethon aired September 5, 2014 in simultaneous substitution (in many areas) with the American telethon, simultaneously on English language networks CBC Television, City, CTV and Global, as well as CHCH-DT in Hamilton, Ontario, CHEK-DT in Victoria, British Columbia, CJON-DT in St. John's, Newfoundland and Labrador, and specialty channels TLN, Fight Network, Gusto TV, AMI-TV and the Hollywood Suite channels. The Canadian broadcast of the telethon benefits EIF Canada, the Canadian arm of the Entertainment Industry Foundation, with all donations benefiting cancer research in Canada.[16]

On 19 October 2012, Channel 4 in the United Kingdom aired their first telethon for Stand Up To Cancer hosted by Davina McCall and Alan Carr along with Dr. Christian Jessen. A second telethon was broadcast on 17 October 2014, again hosted by McCall and Carr along with Dr. Jessen. Subsequent UK telethons, again on Channel 4, followed in 2016 and 2018.

Stand Up To Cancer's fundraising activities in the UK include the London 3 Peaks Challenge, which involves participants running up the stairs of Heron Tower, 30 St Mary Axe and 200 Aldersgate before abseiling down the outside of 200 Aldersgate.[17]

The most recent one was held on 23 October 2020, despite the Original American version cancelling their telethon.