There are 1.1 billion people living in energy poverty around the world. SELF provides them with a reliable source of energy. It has completed projects in 25 countries.

SELF was founded in 1990 by Neville Williams, who had previously promoted photovoltaics under the Carter administration. For much of the 90’s, SELF’s focus was installing and financing solar home systems for individual families in China and other countries in Asia. Those systems generated enough power to run a few compact florescent lights, and one or two small appliances for four to five hours each evening. SELF’s goal was to establish a business model for supplying these solar systems that could be self-sustained in communities over the long term—one that would eventually pave the way for the commercialization of solar home systems in the developing world. After achieving 11 self-sustaining home solar energy projects throughout Asia, Africa, and South America, Williams left SELF in 1997 to launch a spin-off, for-profit company called the Solar Electric Light Company (SELCO). Based in Bangalore, India, it continues to thrive today.

Bob Freling, SELF’s Director of International Programs from 1995 to 1997, stepped into the role of Executive Director after Williams’ departure. He could see that if SELF were going to truly help eradicate energy poverty throughout the developing world, we would have to think bigger than individual, home solar systems. Instead, we needed to make the needs of entire communities SELF’s priority through an intensive, all-encompassing approach. The direction we took—the Whole Village Development Model—is an integrated philosophy to community empowerment that harnesses energy from the sun to provide solutions that can make access to resources like healthcare, education, and food security a reality.

SELF’s installation of a solar home system in Tibet in the 1990’s brought smiles to this nomad family enjoying nighttime lighting and radio programming for the first time in their lives.
The first project completed under this rubric in 2001 was a solar-powered computer lab at Myeka High School in Maphephethe, South Africa—considered the first of its kind in the developing world. Outfitted with computers, printers, copiers, VCR’s, televisions, and more—all powered by a large solar electrical array—student enrollment soared by 40%, and graduation rates increased by nearly 15%. Since Maphephethe’s success, SELF has created a variety of innovative approaches to solving problems in all community sectors. All of them share high levels of sustainability, replicability, and scalability where they can be adopted by other NGOs, governments, and companies—expanding the reach of our concepts around the world. 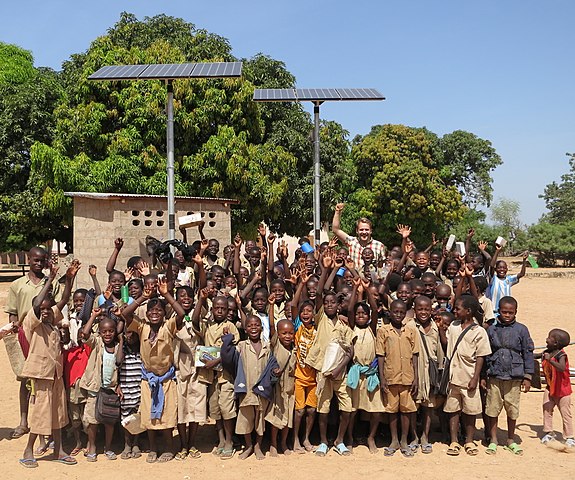 Darren Anderson, SELF project manager, and a group of students from the village of Bessassi in northern Benin celebrate the installation of solar systems that will provide electricity to their school.

The Solar Electric Light Fund (SELF) is a Washington, D.C. based nonprofit whose mission is to design and implement solar energy solutions to assist those living in energy poverty with their economic, educational, health care, and agricultural development. Since 1990, SELF has completed projects in more than 20 countries, using solar energy to power drip irrigation in Benin, health care in Haiti, telemedicine in the Amazon rainforest, online learning in South Africa, and microenterprise development in Nigeria.[1]

SELF believes that energy access is essential to achieving the Millennium Development Goals. SELF's Whole Village Development Model takes an integrated approach for community empowerment by using a mix of solar energy solutions to improve the lives of the 1.5 billion people who don't have access to electricity around the world. By working closely with communities and adhering to its principles of SELF Determination, SELF Help and SELF Reliance, it seeks to provide benefits in:

SELF was founded in 1990 by Neville Williams, an award-winning journalist and author (Chasing the Sun: Solar Adventures Around the World), who had experience actively promoting solar power as a staffer with the U.S. Department of Energy during the Carter administration.[3] For much of the 1990s, SELF's primary mission was to deliver solar home systems – 50-watt units installed at the household level that could generate enough power to run a few compact fluorescent lights, a radio, and a small black and white television for four or five hours each evening.[4] The electricity generated by the solar panel is stored in a battery, which then provides power at night and during rainy weather.[5]

In its early projects, SELF used funds donated by private philanthropies to buy home-size photovoltaic systems in bulk on the open market, usually enough for one small village at a time. SELF then sold the systems to villagers in developing areas, in partnership, where possible, with in-country nonprofit agencies. Each participating household made a 20 percent down payment on a solar energy system and paid off the balance – usually between $300 and $400 – over several years. The buyers'payments were pooled in a local revolving loan fund from which their neighbors could borrow to buy their own solar power gear. SELF used a portion of the proceeds on the equipment to establish a local dealership and train residents as solar installers and technicians. The revolving loan funds made it possible for villagers to finance the continued dissemination of solar systems in their areas.[6]

Focusing on the Home & Creating SELCO

Over time, SELF began to evolve more elaborate project structures. In a joint venture with local partners in India, SELF formed a for-profit subsidiary using India's Ministry of New and Renewable Energy to tap World Bank funds set aside specifically for photovoltaic installations. In part, the company used the money to finance rural co-ops' bulk purchase of solar-energy systems for their members, to install the systems, and to train local technicians. The company then repaid the World Bank's loan from funds collected from the co-ops.[7]

In 1997, SELF decided to launch a for-profit affiliate, the Solar Electric Light Company, or SELCO, based in Bangalore, India, whose goal would be to sell solar home systems in the states of Karnataka and Andhra Pradesh. Neville Williams stepped down from his role with SELF to run SELCO, and SELF's board of directors appointed Robert A. Freling as the new executive director.[8] Since 1995, SELCO has sold, serviced, and financed over 115,000 solar systems.[9]

Beginning in 2000, SELF embarked on its next generation of projects that would seek to harness solar energy for things such as advancing water pumping and purification, purveying electrification to rural schools and health clinics, providing power to small businesses and micro-enterprises, and facilitating communication access.[10]

The first opportunity to fulfill this expanded vision was found in South Africa, where SELF had been working on a project to install solar home systems in the Valley of a Thousand Hills, in the province of KwaZulu-Natal. SELF installed a 1.5-kilowatt solar array, which generated enough electricity to power approximately 20 PCs donated by Dell Computers and a small satellite dish that delivered Internet access to Myeka High School. This was the first solar-powered computer lab built in South Africa, and the pass rate at Myeka High School jumped from 30 percent to 70 percent within a year and a half of installation.[11]

In 2003, SELF found the opportunity to implement a "Whole-Village" approach when the U.S. Department of Energy (DOE) invited SELF to carry out a solar electrification project in Nigeria. With support from the DOE, SELF equipped three villages in Jigawa State, in northern Nigeria, with solar power systems for a community water-pumping system, a health clinic, a primary school, street lighting, a portable irrigation pump, and a micro-enterprise center.[12] Since then, SELF has continued to implement this model in other project countries.

In partnership with the International Crops Research Institute for the Semi-Arid Tropics (ICRISAT) and Association pour le Developpement Economique Social et Culturel de Kalalé (ADESCA), SELF has installed a total of eleven of its Solar Market Gardens™ (SMG), an innovative, unique solar-powered drip irrigation system, for women farming collectives in Dunkassa and Bessassi, two villages in the arid, northern part of the country.[14]

A two-year study conducted by Stanford University's Program on Food Security and the Environment department appearing in the Proceedings of the National Academy of Sciences found that SELF's SMGs, "significantly augments both household income and nutritional intake, particularly during the dry season, and is cost effective compared to alternative technologies."[15]

In addition to the SMGs, SELF has also installed three community water wells, streetlights, and solar systems to power two schools and a health center. In 2014, SELF finished the installation of a solar micro-grid that will power a micro-enterprise center in Bessassi, and construction of a second micro-enterprise center in Dunkassa is nearing completion. SELF's future plans include replicating the potable water pumping stations in two more villages, assessing the potential for vaccine refrigerators at solar-electrified clinics, preparing for a pilot internet café, and planning a solar home lantern program.

After the 2010 earthquake, SELF and Partners In Health teamed to develop the Rebuilding Haiti Initiative to fully power eight health centers.[16] SELF has also installed 100 solar powered streetlights in tent camps to increase safety, and in collaboration with NRG Energy, Inc. and the Clinton Bush Haiti Fund, SELF has completed the Sun Lights the Way: Brightening Boucan-Carré project by installing solar systems to power a fish farm, 20 schools, a Solar Market Garden™, and a microenterprise center.[17] The success of this project has increased the quality of education for students in remote areas and has contributed to ensuring year-round food security.

In 2013, SELF solarized an additional seven schools to serve nearly 2,000 students, and also installed 20 solar-powered streetlights around Boucan-Carré in dangerous areas. Currently, SELF is installing two solar micro-grids that will provide electricity to 15,000 people in Port-à-Piment, Côteaux, Roche-à-Bateaux, and Fe-Yo-Bien, to be completed in 2015.

With support from Acción Social (a governmental agency in Colombia) and Microsoft, SELF conducted a week-long site assessment and determined that deploying solar electric systems for the indigenous Arhuaco, Kogi and Wiwa communities in the Sierra Nevada mountains of northern Colombia is feasible. The project, a part of the Cordon Ambiental y Tradicional de la Sierra Nevada de Santa Marta initiative led by Acción Social, is intended to power the health and educational facilities in the villages, along with community lighting systems at select locations.[18]

SELF was selected as a Grand Challenges Explorations winner, an initiative funded by the Bill & Melinda Gates Foundation, for groundbreaking research in solar powered direct-drive freezers to support global health and development. To support immunization efforts at two remote village health posts in the mountains of Colombia's Sierra Nevada de Santa Marta, SELF successfully field-tested three solar powered direct-drive vaccine refrigerators and the first commercially available direct-drive, battery-free vaccine icepack freezer.[19] Following the tests, the fridge and freezer were donated to the village of Sabana Crespo.

SELF is also working on plans to install a solar energy based microgrid in the village of Sabana Crespo to power coffee facilities, the village general store, a health care clinic which includes a new laboratory, and the village's school and cafeteria.[20]