by Village Enterprise in Extreme Poverty

“I had low esteem because I had nothing,” Penina, a slender woman who confidently sports red streaks in her hair, explains while rearranging a stack of cabbage. It’s a warm, sunny day in West Pokot County, Kenya, and the street where her small produce shop is located is bustling with customers and fellow sellers. Six months ago, Penina never imagined that she would own her own grocery store as she had always relied upon casual jobs to support her family. However, those jobs did not provide enough income to send her children to school, and it was only possible to eat one meal a day. Penina and her family were often judged within the community for their socioeconomic status, ultimately finding themselves, unfortunately, ostracized from society for being in poverty. Penina’s low esteem stemmed from this climate of loathing that surrounded her and her family; she wondered if she would ever escape that state of humiliation. Penina’s life drastically changed when she was selected to join the Village Enterprise economic inclusion program. She attended the training to learn how to run a business and soon thereafter began a small produce stand selling millet, beans, maize, cabbage, and potatoes. “I didn’t expect to be independently earning cash — I feel really proud,” she says with astonishment.

Fast forward two years. Our team is working directly with the County Government of West Pokot to create a program that can be replicated throughout the region. The goal is to create opportunities so more people like Penina can experience positive life changes through business training and access to resources. This new venture is called The Economic Justice Program and is an Open Society Foundation (OSF)-funded project providing technical assistance to the County Government of West Pokot, Kenya. Additionally, this project is in partnership with Wasafiri Consulting, a think tank that helps leaders and their organizations—including governments—tackle some of humanity’s most complex problems. Through this project, we seek to empower business savings groups by registering existing groups into producer organizations, training the producer organizations, and then linking them to wholesale markets. 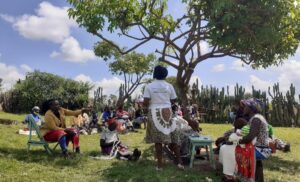 The Economic Justice Program is the first of its kind, a pilot project that will significantly assist the West Pokot County Government. This project has helped increase the capacity of government officials within their policy formulation processes and enabled them to address current gaps at the county level. The policy that will evolve out of the Economic Justice Project will be a tool for resource mobilization, fund utilization, and program implementation. Future policies will be formulated with best practices in mind while addressing illegalities that were present before and ensuring the presence of supporting systems.

The County Executive Committee Member of Finance, the Honorable Augustine Lotodo Monges, tells us that he is excited about the project and notes that the economic inclusion program would positively change how resources are shared and distributed at the county level. He affirms that “this is due to the noble idea of formulating a policy that will guide the distribution of resources in West Pokot County. Our target participants will be the poorest of the poor, as opposed to how it has been before, and this will go a long way in ensuring social and economic inclusion, hence improving the economy of our county.” He adds that the capacity of county executive committee members in the planning and budgeting processes, as well as the formulation and implementation of policies at the county level, will be improved after the various training sessions the cabinet received because of the Economic Justice Project.

Mrs. Emily Chepoghisio, the County Executive Committee Member for Youth Sports, Tourism and Gender, acknowledges that the Village Enterprise approach would place emphasis on targeting young people, women, and economically vulnerable groups. She notes that adjusting the programs at the county level will positively impact the community.

County Executive Committee Member for Education and Technical Training, Mrs. Ruth Kisabit, adds that “the addition of training focused on economic inclusion will be eye-opening for those who benefit from resources at the county level. They will be well-equipped with sufficient knowledge to uplift their lives.”

An entrepreneur, who is also a participant of the ongoing Village Enterprise’s Economic Justice Program in West Pokot County, Rose Chelimo, has this to say about the approach:

“Village Enterprise’s poverty Graduation approach has impacted my life and that of my family. My group started with 50 chickens in 2019, and we now have 500 chickens within this short period. With the help of Village Enterprise, my group with three other groups will be registered as a producer organization, which means another milestone in economic inclusion.” 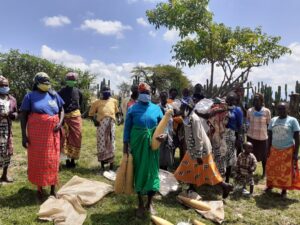 Ms. Chelimo is excited that they will now be eligible for government assistance provided to co-operatives including loans at lower rates of interest and relief in taxation. “We can now engage in major investments going forward,” she explains with a broad smile on her face.

With the support of Village Enterprise’s Economic Justice Program, Rose and other first-time entrepreneurs will be linked directly to value chains without interference from intermediaries, a nuisance by which they were previously constrained.

The Economic Justice Program intends to have buy-in from the County Government of West Pokot in order to incorporate the economic inclusion program in its future interventions, as a way of sustaining efforts to eradicate extreme poverty. Nancy Chumo, the Country Director of  Village Enterprise Kenya, noted that this new program contributes to our organization’s strategy of scaling through governments. She tells us that, “in such an arrangement, it is impressive to see the West Pokot County Government adopt an economic inclusion program in service delivery, resource allocation, and governance.” This is an exciting time for the Village Enterprise Scaling Team as we begin drafting the Poverty Graduation Policy, a product of our strong technical assistance. This is also an exciting time for many of our entrepreneurs as the market linkage connection allows enterprises and savings groups the ability to receive increased returns from their investments due to better prices from more established markets.