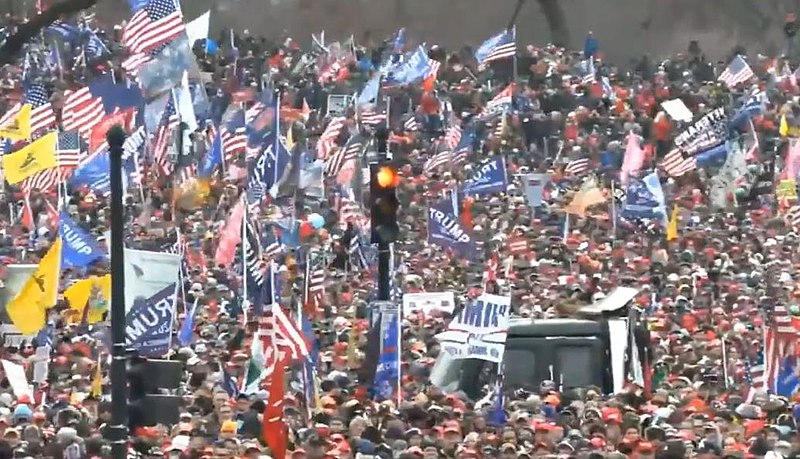 The National Lawyers Guild (NLG) opposes today’s attempt to overturn the election, led by Trump loyalists and right-wing operatives in Washington, DC, in the strongest terms possible. Following a rally by Trump where he continued to falsely claim victory, a right-wing fascist mob stormed and occupied the U.S. Capitol Building and several state Capitol buildings in an attempt by white supremacists and other revanchists to preserve the racist, sexist, and colonial inequalities on which the United States was founded—with complicity by law enforcement.

At the root of today’s right-wing violence are centuries-long efforts to disenfranchise voters of color, made central in this presidential election. For weeks, the Republican party facilitated the administration’s racist, false narratives of a “stolen election,” culminating in today’s attack on the Capitol Building.

At the outset of Trump’s term on January 20, 2017, police responded violently to protesters at his inauguration, deploying chemical and other “less-lethal” weaponry, ultimately kettling a random assortment of over 200 people, arresting and charging them with breaking a few windows—with potential sentences of up to 70 years.

Since May of last year, DC police have brutally punished protesters for demonstrating against the state, police violence, and white supremacy. Those demonstrators demanded a revolution in pursuit of liberation, equality, and against fascism and white supremacy, which police met with violence and mass arrests. As part of the nationwide movement for Black lives, similar events played out throughout the country, which the NLG has supported through its mass defense program.

This is in sharp contrast to the police response to white supremacist violence in Charlottesville, VA in 2017, where right-wing operatives and loyalists rioted in attempt to reverse a city council decision to remove racist monuments. Police stood down, but the anti-racist, anti-fascist left did not. Counter-protesters moved to protect the town and its residents, but the white supremacists retaliated, with one driving a car into the middle of a counter-protest, injuring dozens and killing Heather Heyer. The NLG was there to provide legal support to those anti-racist counterprotestors in that moment, and throughout the aftermath and J20 trials.

Today, police stood down yet again—as is expected of such an inherently white supremacist institution. These right-wing operatives are their friends, family, and political brethren. The difference between the police response to protesters of color just a few months ago and all throughout American history, and the current response to white Trump supporters instigating a coup, lays bare the priorities of U.S. law enforcement. As we witnessed today, right-wing revanchists were able to storm the Capitol with little to no resistance by law enforcement. Some police officers were even documented opening barricades to let right wing operatives through, taking selfies with them, and carefully escorting them away from the scene.

These events exhibit the racist, politically-imbued nature of policing in DC and the United States at large. The NLG continues to oppose this racist system, with all support and power to the people.