At the corner of South Sawyer Avenue and West 24th Street in Little Village, a vibrant glass mosaic mural of a woman offering fruit and vegetables serves as a serene invitation to the Amor de Dios food pantry.

The pantry, a longtime Greater Chicago Food Depository partner, is also located just steps from where a 13-year-old boy named Adam Toledo was killed by police in March – a local tragedy that swiftly became national news. Pastor Ramiro Rodriguez and the volunteers of Amor de Dios have steadfastly continued to serve the community during a time of collective grief and turmoil. “¡Los jóvenes se han reunido – muchos, es increíble!” he said. So many young people have gathered around, it is incredible!

Throughout the pandemic, Amor de Dios has continued to open its pantry doors every Thursday afternoon to hundreds of community members in need of food. Earlier in the crisis, the pantry served nearly 300 people each week. A year later, they continue to serve a heightened need compared to before the pandemic.

Rodriguez, 58, has spent the last 15 years serving Little Village. In 2005, after going through a divorce, Rodriguez approached the pastor at the time, asking if there was a church choir. A man of many skills – he is also an electrician and plumber – Rodriguez is now featured in pictures on the wall when you walk into the pantry, leading the church band with instruments and songs.

Since his first visit, Rodriguez has been at the church every Sunday and has not skipped a day. In December 2007, he opened what we now know to be the Amor de Dios food pantry.

“Estamos comprometidos a la comunidad,” Rodriguez said. We are committed to the community.

Hermana Petra Baza, 59, mother of three, recruited her family to be volunteers at the Amor de Dios pantry more than eight years ago. She is a lead volunteer now, which means she’s usually at the pantry several days a week, working long hours to prepare for the food distribution. A staunch believer in food justice, Baza has even traveled to Washington, D.C. with Food Depository staff and advocates to lobby for legislation to help people experiencing hunger.

When asked why she still volunteers, she answers “hay mucha necesidad.”  There is a lot of need.

Cristal Castro, 26, daughter of Baza, also volunteers regularly and says she has developed a great relationship with many of the people who receive food from the pantry. Many of them are family members of former school classmates, she said.

Currently, Castro works in the mental health field managing therapy sessions for individuals seeking support. When asked how she manages her own mental health after rough days, she looked at her mother and smiled.

“My family and my boyfriend distract me,” Castro said. “Because it is important to take that time for myself. Listening to everyone’s problems is a lot to take in sometimes, but it’s a field that I’m really passionate about.”

Within the Latino community, mental health is often considered taboo and rarely talked about among family, according to Mental Health America. Many factors can contribute to lack of mental health access in the Latino/Hispanic population, such as religious beliefs, shortage of Spanish-speaking mental health professionals, and it’s simply not talked about. The mother and daughter took comfort knowing they have support at home and at Amor de Dios to help them navigate some of their more difficult days.

A support system that pushes through together

Salvador Ibarra has persevered through his own personal challenges to serve others. Ibarra, 55, began volunteering at Amor de Dios nearly three months ago after learning about the importance of service through an Alcoholics Anonymous program.

Ibarra struggled for a moment to find the right words to describe how he felt about Amor de Dios. Ibarra has built a support system at Amor de Dios, in particular with Pastor Rodriguez who has introduced him to this community of other volunteers. On occasion, he has also benefited from the food distributed at the pantry, which he’s also shared with others.

He hopes to return to his full-time job, which is in home labor as a painter, and to continue volunteering at Amor de Dios.

The importance of nutritious food

Many people who visit Amor de Dios are seeking fruit and vegetables. Little Village residents are predominately Mexican American, and Latinos are generally considered to be at high risk for heart disease, obesity, and diabetes among other diseases. In the United States, adults have a 40% chance of developing type 2 diabetes, according to the Centers for Disease Control and Prevention. That percentage increases to 50% if you’re Hispanic/Latino.

Cecilia Avalos, 60, who has arthritis and has been diabetic for more than 30 years, seeks out fresh fruits and vegetables for her health. Avalos also still provides for her two children, both of whom are enrolled in college and haven’t been working during the pandemic. Winter’s the hardest season because her arthritis prevents her from walking to the pantry. 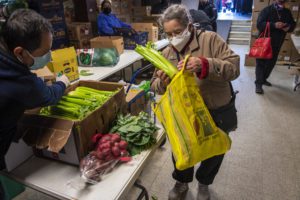 The pandemic has caused a lot of stress for Avalos. She has limited herself from watching the news and interacted less with others. But she continues to put God first, she said.

“I get a little bit from SNAP, which helps supplement anything additional I need and to pay for rent,” Avalos said.

Occasionally, Amor de Dios receives food donations from local grocery stores and restaurants. Many people from the community know that if they see Pastor Rodriguez with a truck of food outside, he is going to share it directly back into the community.

Amor de Dios is more than just a food pantry. It is a source of hope for a proud but heavy-hearted community reeling from recent tragedy. It represents the resilient spirit of Little Village.