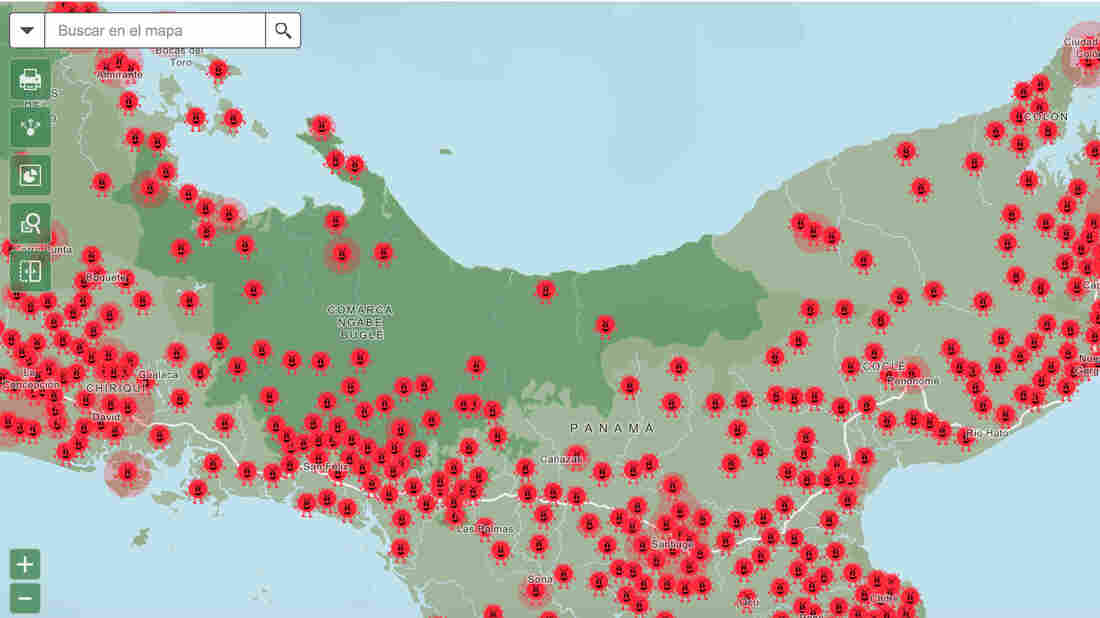 Doviaza’s maps overlay the daily number of COVID cases reported by the health ministry (depicted as the spike protein of the virus, shown in red) with locations of indigenous communities (dark green). Geoindigena/Rainforest Foundation hide caption 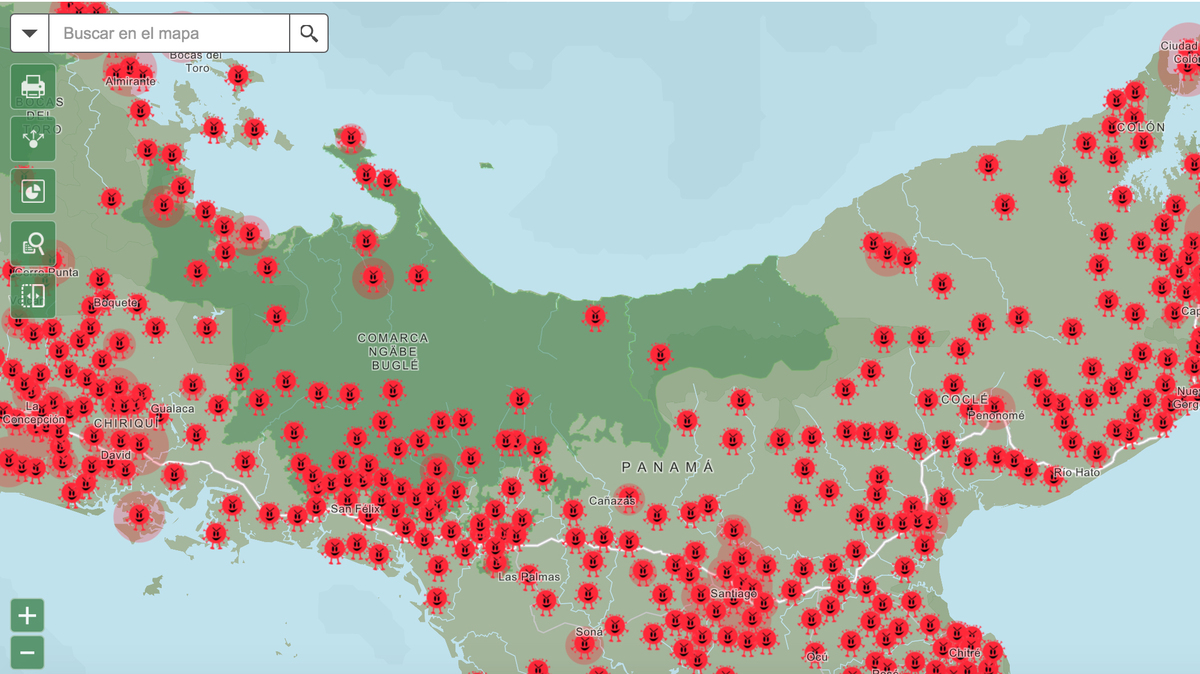 Doviaza’s maps overlay the daily number of COVID cases reported by the health ministry (depicted as the spike protein of the virus, shown in red) with locations of indigenous communities (dark green).

When COVID-19 was detected last spring in Panama, 26-year-old cartographer Carlos Doviaza feared for his “brothers” — not his blood relatives but indigenous people like himself.

He believed the way he could help them was to do what he does best: making maps.

Doviaza didn’t go down a traditional path to learn his trade. He had to drop out of college where he was studying computer engineering because he couldn’t afford the fees. A true believer in the power of maps, Doviaza taught himself cartography skills and began making maps to help indigenous communities deal with various land issues. 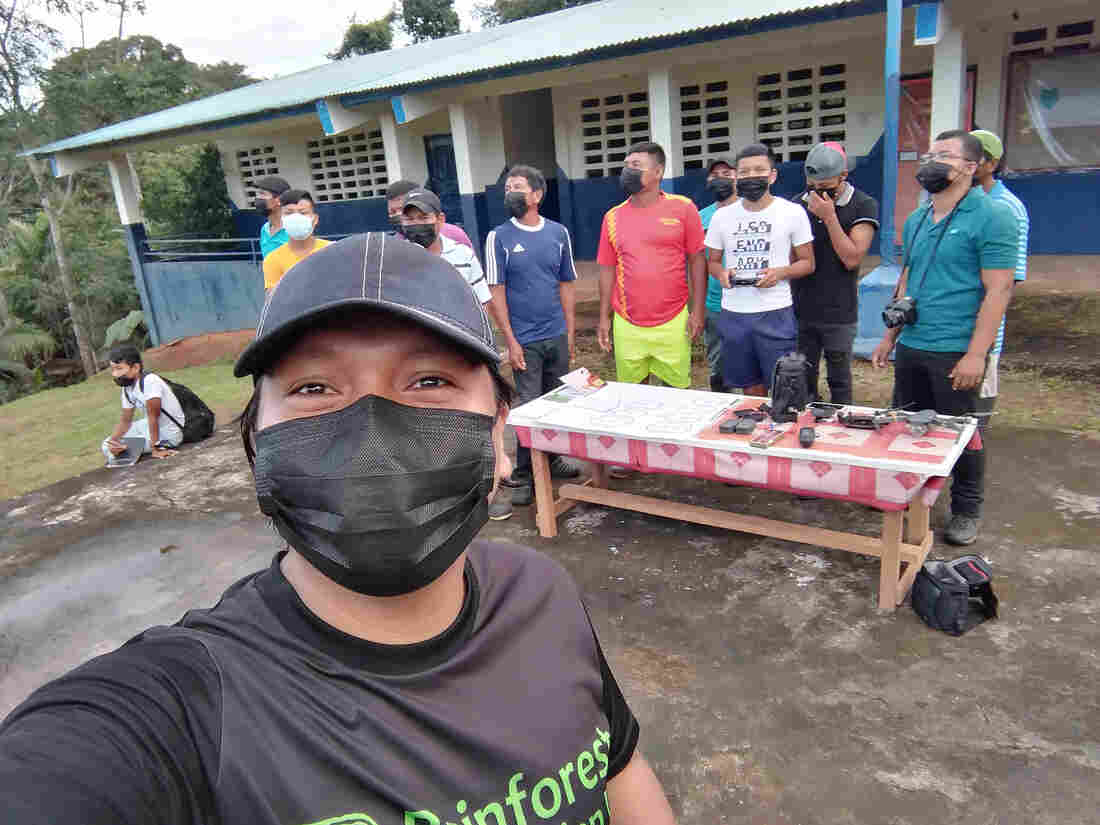 Cartographer Carlos Doviaza participates in a training on the use of drones to monitor forests in a community called La Marea, Darién. Carlos Doviaza hide caption 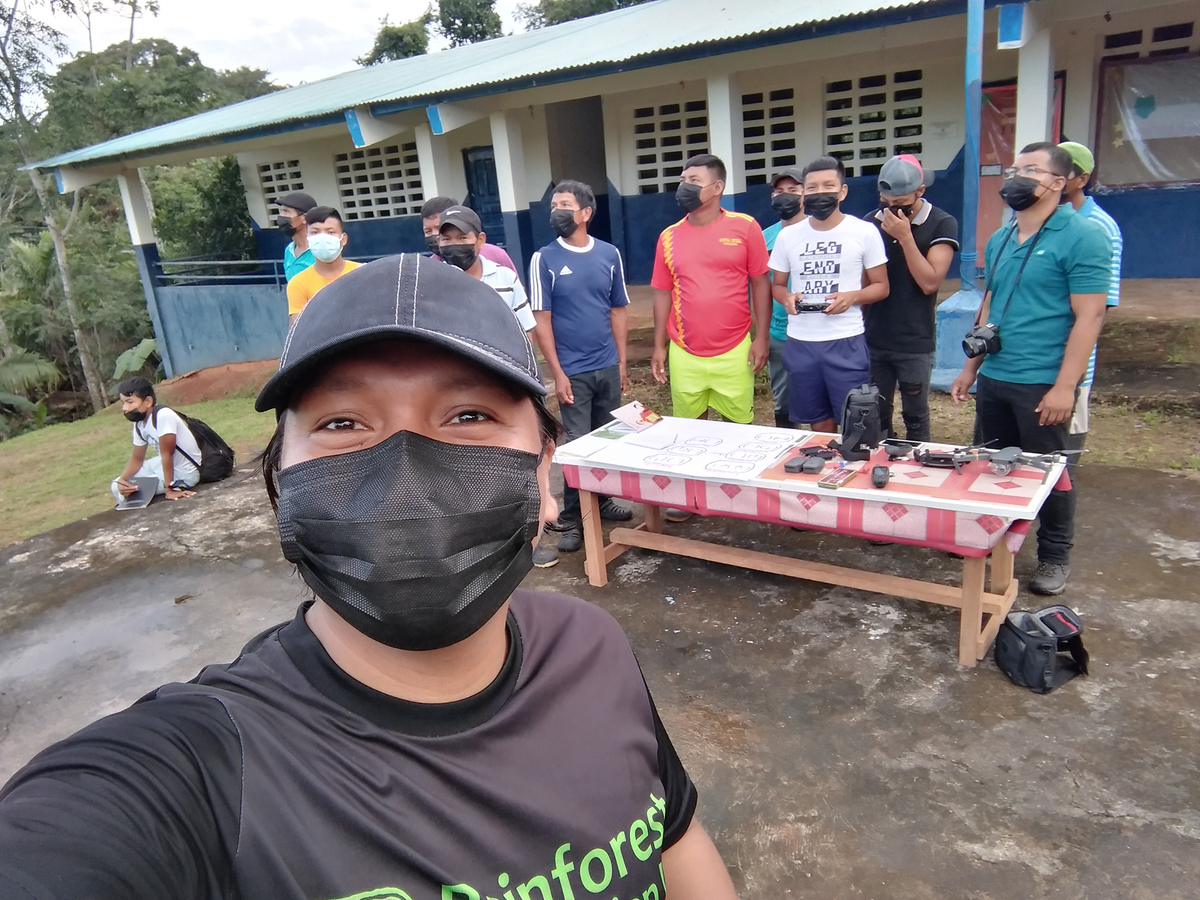 Cartographer Carlos Doviaza participates in a training on the use of drones to monitor forests in a community called La Marea, Darién.

“I have learned that data and maps often are more powerful than words,” says Doviaza, who was born and raised in an indigenous village without electricity in El Salto — right in the heart of the tropical forest. He moved with his parents to Panama City as a teenager in 2008 to receive a better education.

Doviaza is one of the 400,000 members of the native Panamanian community — 12% of the country’s population. The group has historically been at higher risk for diseases due to a lack of access to clean water and health care and an extremely high poverty rate. The World Bank reports that more than 90% of the people in Panama’s indigenous areas are below the poverty line.

At the start of the pandemic, he worried that the already vulnerable community would be hit hard. “We have always been disadvantaged, and I knew we should prepare for the worst,” Doviaza says.

His prediction was spot on. Many villages in the rainforest elected community leaders to take turns at village entrances to prevent residents from leaving and outsiders from coming in. And those isolated communities started to run out of food and other basic resources, such as soap, medicine and hygiene products.

The power of data

Doviaza created an interactive online map to monitor the pandemic situation in indigenous communities. The map overlays the daily number of COVID cases reported by the health ministry in each district with the locations of indigenous communities. The platform, created last May with help from the environmental nonprofit Rainforest Foundation, also conveys information about what resources each community needs, how to get to the villages and where different organizations are providing help.

It was the next stage in a career Doviaza has forged since 2015, traveling around the country and mapping indigenous lands — sometimes using drones to do so. He also founded a charity called Geo Indigena that trains youth in villages to use GPS and smartphones to produce maps of their communities.

Indigenous community leaders — like tribal chiefs (caciques) or kings (reyes) — often use Doviaza’s maps when they request land recognition from the state. Those communities that are already recognized as reservations use the maps to resolve territorial disputes. Indigenous reservations in Panama are often threated by farmers and illegal lodgers seeking natural resources and more space for their plantations — even during the pandemic.

Over the last year, Doviaza’s maps were helpful when humanitarian organizations, including the U.N., responded to the coronavirus crisis. “The map was ideal because it not only shows the COVID-19 data but all the structural information you need to face the crisis there,” says Beatriz Schmitt, national coordinator of the small donations programs at the United Nations Development Program (UNDP) in Panama, whose team works remotely to provide support.

To a community king, maps say “We exist”

Not every indigenous community in Panama is even on an official map. While the Panamanian government officially recognizes seven indigenous lands or reservations (called comarcas), many native people live in villages outside these areas.

Doviaza included in his map 38 indigenous territories, including the so-called “collective lands” — communities that identify as a group but don’t necessarily have land rights yet (many are currently involved in legal efforts to claim the land). Doviaza knows their locations because he has been helping these communities map their territories for state recognition. 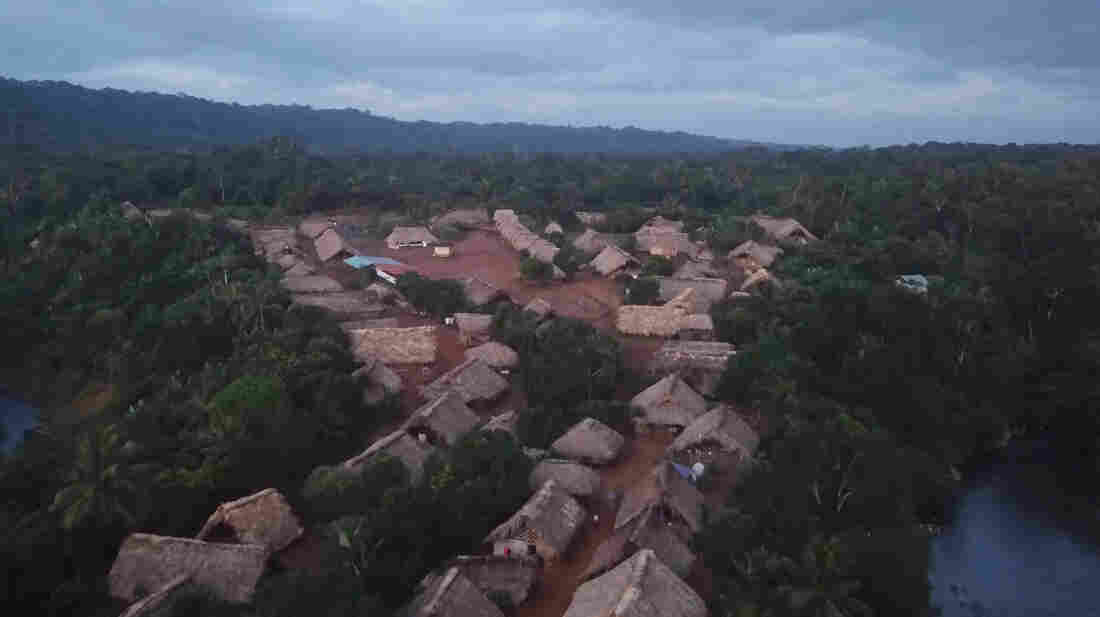 This kind of detail proved essential for the Naso, a group of 5,000 people living in scattered villages on the banks of the Tribe River in northeastern Panama. Their community sits in a remote ecological reserve, only reachable by a two-hour boat trip from Changuinola, the closest small town. Many in Panama don’t know the Naso even exist. Their reservation was only officially recognized by the government this past December — the conclusion of a 50-year-long judicial fight.

Their leader, Rey Reynaldo Santana, known in Panama as the “last king in the Americas,” says the community struggled for months with hunger and lack of medical care during the lockdown. “We couldn’t go to the nearby town to sell our crops or buy vegetables, and we didn’t receive proper medical assistance,” he says. He recalls climbing a hill, looking for a cellphone signal so he could call an ambulance for an elderly lady infected with COVID. The ambulance never came, he says. Fortunately, she recovered, he says.

Risking his own health, Santana traveled several times from his community to the capital — a 15-hour journey involving boats and buses — to ask authorities for help. Santana used Doviaza’s map to show their location.

“Even in the closest town, people don’t know us and where we live, much less the government officials,” he says. Santana shared screenshots of the map with health workers and police officers who occasionally went to the villages inside the reservation to enforce the lockdown and bring medicine and food. With the map they could pinpoint reservation borders and the best access points to each village. “With this map we said, we exist,” said Santana.

The Naso people were not the only ones who struggled with the pandemic. A survey conducted last April by the UNDP of 20 Panamanian indigenous communities living in Darién, a jungle on the border with Colombia, found that 16 of them were also struggling — especially with the lack of food and medications.

Communities reported needing water, hygiene products, health care and diesel to transport the ill to hospitals. One indigenous village, Arimae, was especially affected economically from the pandemic. They are located right off of the Pan-American Highway, where many families would sell their crop and art crafts in small stores. They were forced to stop when the government introduced a mandatory lockdown, and there were 98 cases and three deaths in one month in the neighboring town of Santa Fe, population 6,000.

“We starved,” says Elibardo Membache, the leader of the collective lands of the Emberá and Wounaan, a group of 4,000 indigenous people distributed across 43 villages, including Arimae. During the lockdown, they received only a few food bags from the federal government program “Solidary Panama,” he says. “We lacked everything: meat, salt, oil, matches to light fires.”

According to the federal government, people in the Darien region, where 48,000 indigenous and non-indigenous people live, received from the government an average of 5,400 bags of food per month and a total of about 285,000 bags since April 2020. The help is still ongoing, but Membache says most of the food arrives in the towns and does not make it to the outlying indigenous communities.

The residents of Arimae were able to cope with the help of other villages that sent them bananas and cassava and from humanitarian groups that used Doviaza’s map to identify their needs and plan aid.

The map has been an integral to their work, says Anibal Cardenas-Mosquera, manager of sustainable development at Global Brigades and head of solution mapping at the UNDP in Panama. “Through the map, I could see that some indigenous territories in Darién were already receiving support from other organizations, so we could relocate those resources to other communities that were in a much worse situation,” he says. 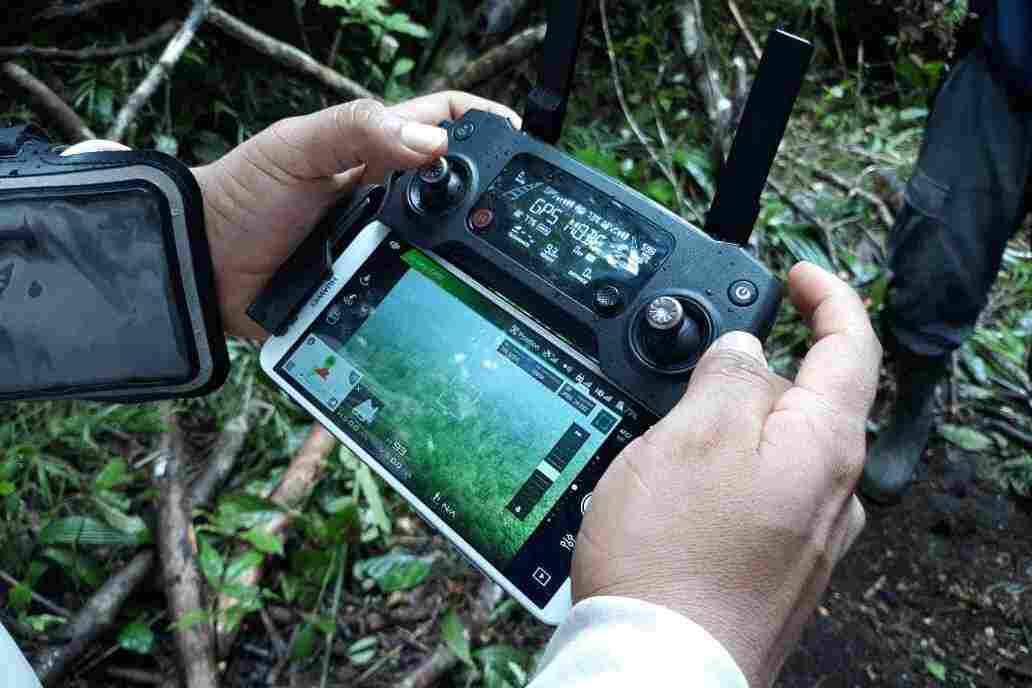 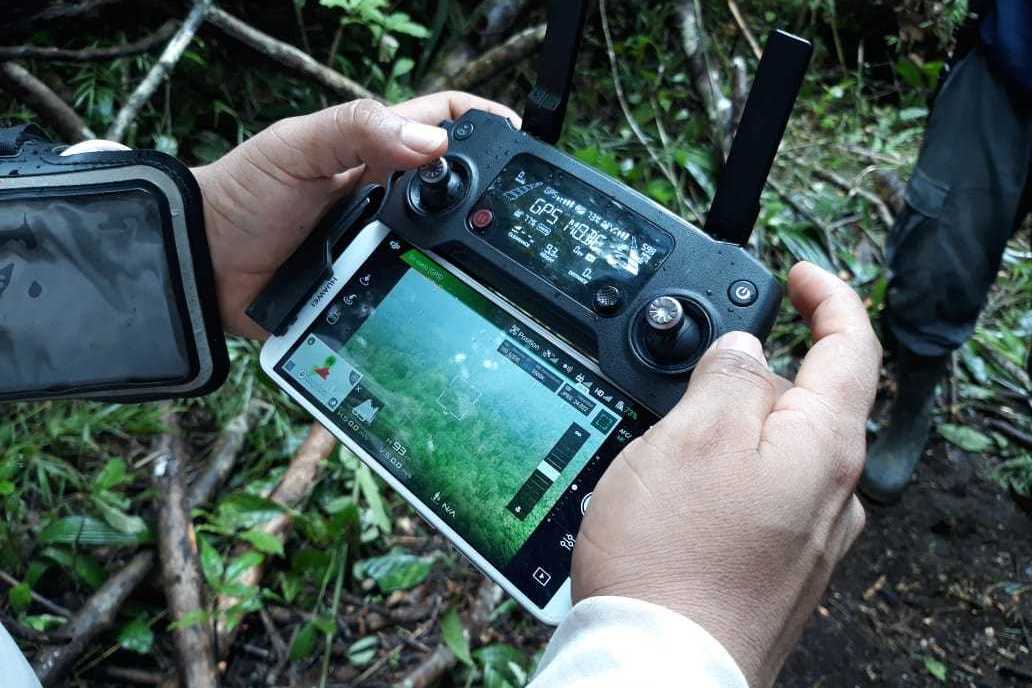 Nina Tushev, co-founder of Tushevs Aerials, who has been training indigenous communities worldwide to monitor their land and produce maps using drones, says Doviaza’s initiative empowers these communities. “This map shows how important it is for indigenous peoples to have access to technology as well as spatial literacy,” she says.

Doviaza says the situation is currently not as bad as last August. The red dots representing COVID cases on his map have been decreasing. The villages are not under lockdown anymore, vaccination campaigns have started and COVID numbers have been dropping in the country after a peak of almost 4,000 new cases a day in January.

But Doviaza is not at ease. He keeps updating the map with the latest numbers and plans to make it more user-friendly. “We lost many of our wise elderly and even young people. Irreparable losses,” he says. “Now everyone is back outside without masks, and we don’t know what is going to happen.”

Sofia Moutinho is a Brazilian journalist covering science, health, the environment and vulnerable communities. She is a Pulitzer Center fellow and has an M.A. in science journalism from Columbia University. This story was produced with support from the Pulitzer Center.

Originally published by the Rainforest Foundation US: Source