We see to build a Black and Brown led abolitionist movement rooted in community power towards the goal of achieving transformative justice and healing justice for all incarcerated people, their families and communities.

Grounded in the principles of abolition, healing justice, and transformative justice, we have multiple programs centered around activism, health and wellness, and leadership building, including a coalition to end sheriff violence, a coalition to stop jail construction, an arts and wellness collective, a rapid response team of healers, a leadership institute for high school aged youth affected by incarceration, a leadership institute for people coming home from prison, a reentry program inside Soledad State Prison, and an influential media department. Immediate campaign focuses include establishing comprehensive and effective civilian oversight of the Los Angeles County Sheriff’s Department and allocating the money from LA County’s 3.5 billion dollar jail plan into mental health diversion programs and community resources. Dignity and Power Now is founded and chaired by Black Lives Matter Cofounder Patrisse Khan-Cullors.

Patrisse Cullors (born June 20, 1983) is an American artist and activist and a co-founder of the Black Lives Matter movement. Cullors created the #BlackLivesMatter hashtag in 2013 and has written and spoken widely about the movement. Other topics on which Cullors advocates include prison abolition in Los Angeles and LGBTQ rights. Cullors integrates ideas from critical theory, as well as social movements around the world, in her activism.[1] She is the author of When They Call You a Terrorist: A Black Lives Matter Memoir.

Cullors was born in Los Angeles, California. She grew up in Pacoima, a low-income neighborhood in the San Fernando Valley,[2] and attended Cleveland High School in Reseda.[3] She became an activist early in life, joining the Bus Riders Union (BRU) under the leadership of Eric Mann as a teenager[2][3] during which time she attended a year-long organizing program led by the Labor Community Strategy Center[4] (which organised the BRU[5]). She learned about revolutionaries, critical theory and social movements from around the world, while practicing activism.[1]

Cullors recalls being forced from her home at sixteen when she revealed her queer identity to her parents.[6] She was involved with the Jehovah's Witnesses as a child, but later grew disillusioned with the church. She developed an interest in the Nigerian religious tradition of Ifá, incorporating its rituals into political protest events. She told an interviewer in 2015 that "seeking spirituality had a lot to do with trying to seek understanding about my conditions—how these conditions shape me in my everyday life and how I understand them as part of a larger fight, a fight for my life."[7] She later earned a degree in religion and philosophy from UCLA.[2] She also received an MFA from USC.[8][better source needed] 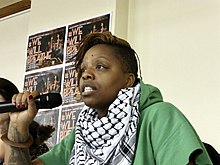 Cullors teaches at Otis College of Art and Design in the Public Practice Program.[9] She also teaches in the Master's Arts in Social Justice and Community Organizing at Prescott College.[10][11]

Along with community organizers and friends Alicia Garza and Opal Tometi, Cullors founded Black Lives Matter.[12][13] The three started the movement out of frustration over George Zimmerman's acquittal in the shooting of Trayvon Martin.[14] Cullors created the hashtag #BlackLivesMatter in 2013 to corroborate Garza's use of the phrase in making a Facebook post about the Martin case.[15] Cullors further described her impetus for pushing for African-American rights stemming from her 19-year-old brother being brutalized during imprisonment in Los Angeles County jails.[16]

Cullors credits social media being instrumental in revealing violence against African Americans, saying: "On a daily basis, every moment, black folks are being bombarded with images of our death ... It's literally saying, 'Black people, you might be next. You will be next, but in hindsight it will be better for our nation, the less of our kind, the more safe it will be."[17]

In 2017, she said that the movement would not meet with United States president Donald Trump just as it wouldn't have met with Adolf Hitler, as Trump "is literally the epitome of evil, all the evils of this country — be it racism, capitalism, sexism, homophobia."[18][19]

She has served as executive director of the .[15] The group advocated for a civilian commission to oversee the Los Angeles County Sheriff's Department in order to curb abuses by officers. By organizing former jail inmates as a voting bloc, the group hoped to sway the L.A. County Board of Supervisors to create such a commission, as well as gather enough votes to elect a replacement for L.A. County Sheriff Lee Baca, who resigned in 2014 for separate reasons.[20] However, the group did not succeed in its efforts.

Cullors co-founded the prison activist organization , which succeeded in advocating for a civilian oversight board.[21]

She is also a board member of the Ella Baker Center for Human Rights, having led a think tank on state and vigilante violence for the 2014 .[22] In October 2020, she launched a production company with a deal with Warner Bros. Television.[23]

Cullors defines herself as a prison, police and "militarization" abolitionist,[24] a position she says is inspired by "a legacy of black-led anti-colonial struggle in the United States and throughout the Americas".[25] She also favors reparations for what she describes as "the historical pains and damage caused by European settler colonialism", in various forms, such "financial restitution, land redistribution, political self-determination, culturally relevant education programs, language recuperation, and the right to return (or repatriation)".[24]

She cites the activist and formerly incarcerated Weather Underground member Eric Mann, as her mentor during her early activist years at the Bus Riders Union of Los Angeles.[26] She draws on various ideological inspirations. One is black feminists such as Audre Lorde and her "Black, queer, feminist lens",[24] as well as bell hooks : both "helped [her] understand [her] identity".[27] She cites Angela Davis for her "political theories and reflections on anticapitalist movements around the world", her work towards "a broader antiracist and antiwar movement", and her fight against white supremacy in the US. Frantz Fanon is another inspiration, his "work on colonial violence in Algeria and across the Third World [making] timely connections" for the understanding of the context in which Black people live across the world.[24] She also cites Karl Marx, Vladimir Lenin and Mao Zedong, as "provid[ing] a new understanding around what our economies could look like".[27][28]

Asked whether she believed in violence as a method of protest, she has said that she believes in "direct action, but nonviolent direct action", and that this was also the belief of the Black Lives Matter movement.[19]

In February 2020, she co-endorsed Senators Elizabeth Warren and Bernie Sanders in the 2020 Democratic Party presidential primaries.[29]

In 2014 Cullors produced the theatrical piece POWER: From the Mouths of the Occupied, which debuted at Highways Performance Space.[30] She has contributed articles about the movement to the LA Progressive,[31] including an article from December 2015 titled "The Future of Black Life" [32] which pushed the idea that activists could no longer wait for the State to take action, and called her followers into action by encouraging them to begin building the world that they want to see.

Cullors' book, When They Call You a Terrorist: A Black Lives Matter Memoir[33][34] was published in January 2018. It was co-written with the journalist [35] and featured a foreword from Angela Davis. The Times Literary Supplement reviewed it as a "magnificent accomplishment."[36] It appeared at number 12 on the nonfiction hardcover The New York Times Best Seller list on February 4, 2018.[37]