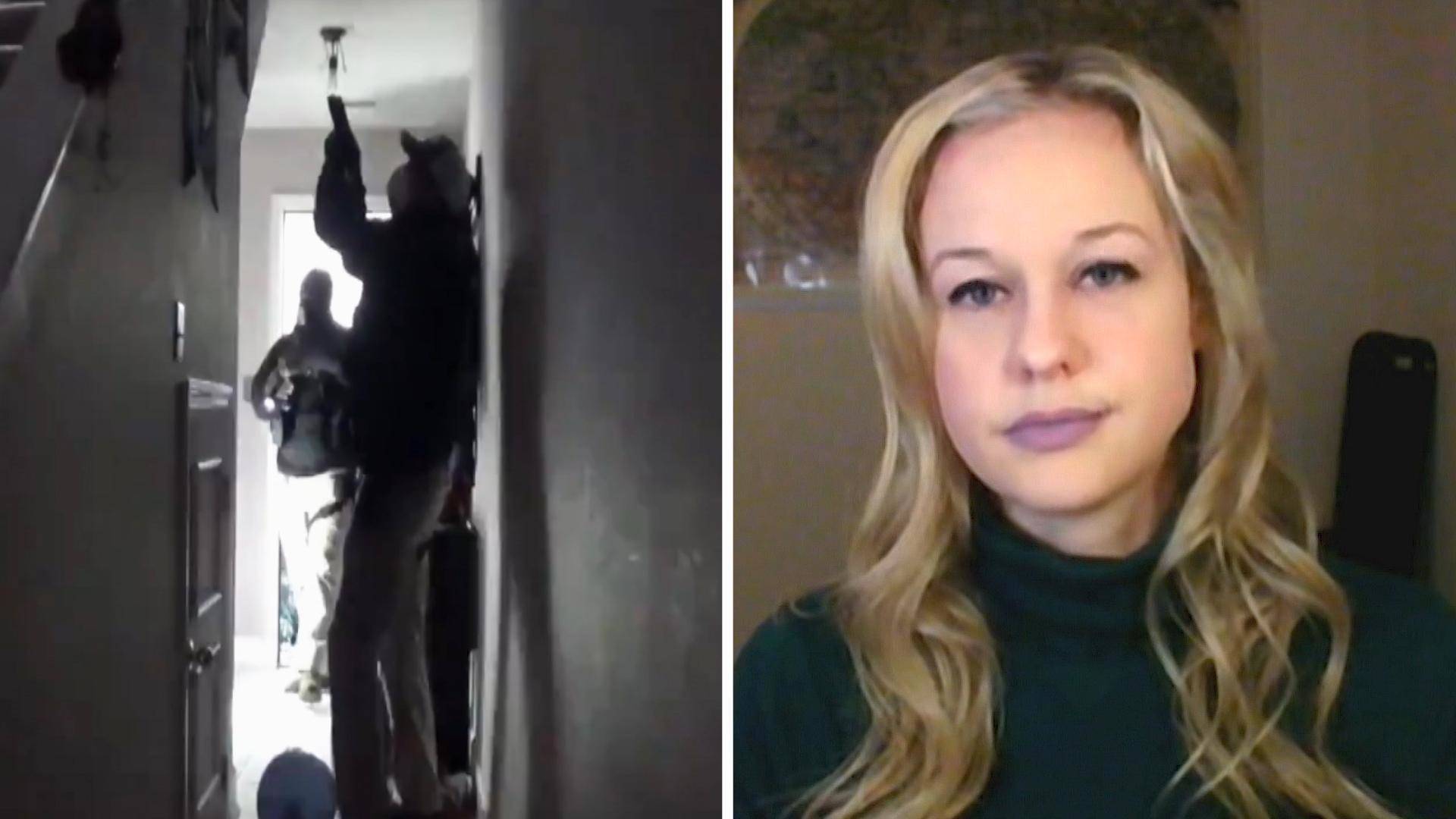 This is a rush transcript. Copy may not be in its final form.

AMY GOODMAN: This comes as DeSantis got into a heated exchange with CNN reporter Rosa Flores this week, when she questioned him about the chaotic rollout of the vaccines in the state that forced the senior citizens into these unbelievably long lines. DeSantis had previously said he would prioritize them for vaccination.

ROSA FLORES: My full question is: What went wrong with the rollout of the vaccine, when we’ve seen phone lines jammed, websites crashing and —

ROSA FLORES: To complete it for you, Governor, we’ve seen websites crash and also senior citizens waiting overnight for the vaccine.

GOV. RON DESANTIS: Where was that at?

GOV. RON DESANTIS: And why was — like, in Lee, why did that happen? Did you investigate why?

ROSA FLORES: Could you tell us why?

GOV. RON DESANTIS: Because we distributed vaccine to hospitals, and the hospitals said, “First come, first serve. If you show up, we’ll do it.” So they didn’t use a registration system. There wasn’t anything that was done. And there’s a lot of demand for it, so people are going to want to go ahead and get it.

ROSA FLORES: So, are you saying there was no plan then from the state to make sure that senior citizens didn’t wait outside overnight?

GOV. RON DESANTIS: So, the state is not dictating to hospitals how — we’re not dictating to Carlos Migoya how he runs his operations here. That would be a total disaster. These guys are much more competent to be able to deliver healthcare services than a state government could ever be.

AMY GOODMAN: He’s not telling the whole story there. Florida Governor DeSantis was the one who dropped the age from 75 to 65, not giving the senior citizens, like John and Maria Luisa, priority so that they didn’t have to wait day after day. And many are infirm and could not.

He also prompted outrage in December, when armed police raided the home of data scientist Rebekah Jones, who was forced to resign in May as the lead software developer for Florida’s coronavirus data portal after she refused to censor information about Florida’s COVID-19 outbreak. Police seized her computers, pointed guns at her children. Jones posted video of the raid on Twitter.

REBEKAH JONES: Do not point that —

POLICE OFFICER 2: Come down the stairs!

Florida authorities said the raid was part of a probe into a recent hack of the Florida Health Department’s website, but Jones said she hasn’t had access to the site in six months.

Rebekah Jones joins us now from her new home out of state.

Welcome to Democracy Now! It’s great to have you with us, Rebekah. I’m so sorry for what you went through. Can you tell us more about how the police raided your home?

REBEKAH JONES: Yeah, there’s actually — excuse me — a 23-minute video that I recorded up until the moment that the police shut it off, where they go through the process that led to them coming into my house with military-grade weapons pointed at my small children.

And essentially what happened was that the Department of Health told the police, “Hey, somebody sent a text message to some of our employees telling them to tell the truth and speak out, and here’s the IP address where it came from.” Of course, Department of Health would know what my IP address is, because I’ve worked remotely for them for more than two years. And the Florida Department of Law Enforcement took the IP address and found out who it belonged to and then came and took my computers, my external hard drives, thumb drives, devices that aren’t even capable of sending any kind of text or email because they’re just storage devices — of course, those had evidence of wrongdoing on the part of the state, but they were just backups, so, of course, I have the originals — and my cellphone.

And I was kind of just in disbelief, you know, when the police released their video of them coming in with their guns raised, one pointed about six inches from my face. I asked them if they were looking for a person, the way that they came into the house. I had no idea what was happening. I had no idea what that message that was sent said until that day. And it was disturbing to have that happen to you for literally doing nothing other than reporting data.

AMY GOODMAN: So, Rebekah Jones, let’s talk about that. Let’s talk about what you were talking about as a Florida data scientist working for the state and why you were forced to leave. We’re speaking on the day after a record-breaking day, and, as you know, these lines of thousands trying to get vaccinations, the most vulnerable having to wait in line for days.

REBEKAH JONES: Yeah, DeSantis has decided to buck the CDC recommendations in several different ways. He forced schools to return back to face-to-face this week, even with the B117 variant out there, which is particularly effective at infecting children. And the state has been dodging releasing information at every opportunity. They had to be sued to release deaths from long-term care facilities, which they have not updated in three weeks. And it took a long time for me to finally be able to force the state to report school cases at all.

And from the beginning, this is — the situation that we’re seeing with the vaccine rollout is almost a parallel to what happened in the early months at DOH when I was working there. I actually notified my superiors on January 24th of last year that we needed to be on top of this, we needed to be setting up surveillance systems, we needed to have a data repository and public information tool that was easy to digest for any range of technology expertise. And we were — I was told that we didn’t need it for weeks, and then that it would just cause a panic for weeks.

And then, finally, when the governor declared a state of emergency on March 12th, I was given permission to build all these data systems — and I had two hours to do it — and give people the information that I thought was most important. And our site was internationally celebrated. Even Dr. Deborah Birx went around telling everybody to go to it. DeSantis even announced that it was the public face of our response. And it became the template and the model for other states to report.

AMY GOODMAN: So, what wasn’t the governor allowing you to report?

REBEKAH JONES: So, I’m actually not a software developer. I’m a geographer. So, we track, as geographers, all kinds of Earth and human interactions. My specialty is in climate. And I’ve been working for the Department of Health for several years in the disease control department, looking at mostly environmental hazards, but also hepatitis A, influenza. So this wasn’t my first epidemiology work.

And when May came around and the state decided to open without consulting any of the epidemiology team — they consulted businesspeople — and they asked us to come up with the metrics and a way to measure the metrics, and to have it added to our data systems and our dashboard in two days, and we did. It was miraculous, but we did. And the supposedly data-driven plan that DeSantis had made was actually being printed and stapled right in front of me when I went to present the findings of the analysis for the first time. They had never seen it before, but the plan was already done. And I don’t know if it was ignorance of what was going on or people being sycophants who wanted to please DeSantis and deliver, or a combination of both, or DeSantis’s orders himself, but the analysis did not match what that already-made plan said.

And so, the leadership that was in charge decided to start changing the way we measured things, changing the way that we reported, trying to move the goalposts, exempting rural counties from the criteria altogether —

AMY GOODMAN: Which, of course, would mean that the numbers would be lower. And you have DeSantis, a very close ally of President Trump, who’s now made his home in Florida at Mar-a-Lago. We only have a minute, and, Rebekah, I wanted to get to this final point, that you were forced to essentially move out of state, after this police raid in December. And you just tweeted, as you were arriving in Washington, D.C., “I left my home in Florida to escape a tyrannical governor who sent police to raid my home for publishing COVID stats, only to arrive in DC as armed terrorists storm Congress trying to overturn the election by threatening to hold Congress hostage.” What has that been like for you, in this last 30 seconds?

REBEKAH JONES: I started to feel that trouble just follows me, or I follow it, no matter where I go, which is actually, I think, the first line in my book. But yeah, it just seems like we’re in a world that’s in disarray. Everything is discombobulated. And no one seems to want to take responsibility for how their actions have impacted our society and our culture and our politics. And it is pervasive. It is everywhere. It’s here in D.C. It’s in Florida. It’s at the highest levels of government, literally, in this country. And I’m just in shock that everywhere in this country is experiencing this kind of sickness of the soul. And I left to get away from that.

AMY GOODMAN: Rebekah Jones, we’re going to have to leave it there, but we will continue to talk to you, we hope, in the future, founder of Florida COVID Action, data scientist and whistleblower. I’m Amy Goodman. Stay safe. Wear a mask. Wearing a mask is an act of love.