Our mission is to catalyze a global solution to the climate crisis by making urgent action a necessity across every level of society.

The Earth is facing a climate crisis, driven by fossil fuels.

At Climate Reality, we?re here to make urgent action a necessity. In politics. In business. In every aspect of our lives. Everywhere.

Led by former US Vice President Al Gore and CEO and President Ken Berlin, we do it by training and empowering everyday people to pull on the levers of power.

Through our trainings, campaigns, and partnerships, we give people the tools, know-how, and network to take on and win climate and justice battles with local, national, and global consequences.

The result is over 31,000 Climate Reality Leader activists mobilizing communities in 170 countries. Branches in 10 critical nations and regions around the Earth and 140 activist chapters (and growing) pushing for practical clean energy policies across the US.

Together, they add up to a powerful movement growing by the day. One by the people. Of the people. For the planet. Join us.

CLIMATE REALITY – DIVERSITY, EQUITY, AND INCLUSION STATEMENT
At The Climate Reality Project, we are committed to building a more just and equitable world, one where all voices are heard and respected regardless of race, religion, color, national origin, sex, sexual orientation, gender identity, age, or physical ability.

We recognize that a diverse and inclusive movement is critical to solving the climate crisis, and that to build this winning coalition, we must ensure that those directly impacted ? particularly those who have been excluded in the past ? are at the center of the movement for change. While the climate crisis manifests on a global scale, we acknowledge that indigenous peoples, low-income families, people of color, and other historically marginalized groups represent frontline communities who experience harmful climate impacts first and worst.

To live our values of a truly sustainable future for all, we must commit to understanding and undoing the historic injustices which contribute to this reality and, in our solutions, address systemic inequities.

At The Climate Reality Project, we believe that equity, fairness, and the fully voiced engagement of frontline communities most impacted by climate change are essential components of any enduring climate solution and that to solve the climate crisis, we must pursue a just transition to a clean energy economy that nurtures healthy and sustainable communities and ecosystems. 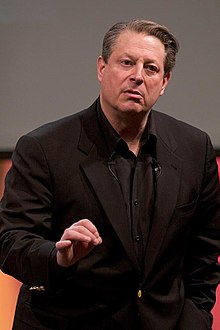 Al Gore during one of his slideshows about the climate crisis, 2006

The Climate Reality Project is focused on climate change education and countering climate change denial campaigns worldwide. The organization is a consolidation of two environmental organizations, the Alliance for Climate Protection and the Climate Project, both founded in 2006 by former U.S. Vice President Al Gore. Gore has described the group as bipartisan.[1][2]

Gore currently serves as chairman of the board of directors.[3]

As of 2015, the organization said it operated 10 branches worldwide and was active in over 30 countries.[4]

The Alliance for Climate Protection was founded in 2006 by Al Gore to encourage civic action against climate change.[1] The organization was founded in Palo Alto, California, and later moved to Menlo Park, California, before relocating to Washington, D.C., in 2009.[5][6] Originally established as a 501(c)(3), the organization later included an affiliated 501(c)(4), the Climate Protection Action Fund,[7] which developed advocacy campaigns focused on climate change solutions through grassroots organizing and lobbying.[8]

The organization was partially funded by proceeds donated from Gore's documentary An Inconvenient Truth, as well as profits from the book of the same name. Gore also donated his salary from his work for the venture capital firm Kleiner Perkins Caulfield & Byers and prize money from his 2007 Nobel Peace prize for a total of more than $2.7 million. The distributor of An Inconvenient Truth, Paramount Classics, also donated 5 percent of the film's box office earnings to the Alliance. The Alliance was also funded by profits from Live Earth concerts in 2007.[9]

The Alliance encouraged federal policies that limited greenhouse gas emissions and supported low-carbon power sources.[10] Former campaigns from the Alliance include the bipartisan "We" campaign, launched in 2008.[11][12] The campaign, which included an advertisement called "We Can Solve It" featuring Nancy Pelosi and Newt Gingrich jointly calling for a response to climate change, was created to prompt public action against climate change on a national and international level.[11] The "We" campaign included partnerships with the Girl Scouts of the United States of America, the United Steelworkers of America and the National Audubon Society.[5][6] The same year, the Alliance launched the "Repower America" campaign to support Gore's directive to shift American homes to 100 percent clean energy within 10 years. This campaign supported climate change legislation in the United States[6][11] and, according to The Washington Post in 2008, was one of the farthest reaching public advocacy initiatives in recent history.[9]

Also in 2008, the Alliance created the Reality Coalition in partnership with the National Wildlife Federation, the League of Conservation Voters, the Natural Resources Defense Council and the Sierra Club. The Reality Coalition used television, print and online advertisements as well as grassroots events to challenge the idea of coal pollution mitigation.[13][14]

The Climate Project, founded in 2006 and based in Nashville, Tennessee, was also supported by Gore's profits from the documentary An Inconvenient Truth.[6] The Climate Project was an educational, worldwide grassroots organization that trained selected members of the public to give public talks, similar to Gore's presentation in the film. The talks focused on the harmful effects of climate change and ways to address climate change at the grassroots level. By 2009, the project had more than 3,000 participants worldwide. These participants, trained by Gore, delivered 70,000 presentations to 7.3 million people.[15]

The Climate Reality Project hosts an annual event called 24 Hours of Reality, a 24-hour live broadcast about the climate crisis and its solutions with a one-hour segment in every time zone.[17][18][19] Each broadcast features celebrities, musicians, elected officials, and thought leaders from around the world.[20] In 2017, the broadcast had a potential reach of 400 million people.[17]

Themes for each annual broadcast are:

The first event, in 2011,[2][29] was a 24-hour event that was broadcast live over the Internet and featured 24 presenters across 24 time zones presenting in 13 different languages.[3] The presentations, which stressed a link between climate change and oil and coal producers,[30] started in Mexico City and traveled west before culminating in New York City with a presentation by The Climate Reality Project's chairman Al Gore.[3] The event included celebrity hosts and panel members such as Renee Zellweger, Fran Drescher and Virgin Group's Sir Richard Branson.[31] The webcast received 8 million views, 5 million of which were unique viewers,[32][33] and was awarded a "Silver Lion" at the Cannes Lions International Festival of Creativity event in 2012.[34] Accompanying this event, The Climate Reality Project also released several short videos covering topics related to climate change. The videos included Doubt, Climate 101 and Grassroots.[35]

A second webcast called 24 Hours of Reality: The Dirty Weather Report was broadcast beginning on November 14, 2012.[32] This broadcast followed a format similar to the inaugural event and featured speeches and presentations from more than 100 activists, business leaders and scientists in 24 locations.[36] The 2012 webcast focused on the impact coal, oil and gas pollution have on weather patterns.[32] The webcast attracted 14 million unique viewers and a viewership of more than 16 million, which set a Ustream record for the most online viewers in a 24-hour period.[33] The event also generated 135 million tweets from Twitter users, compared with 120 million tweets in 2011,[36] and received ten Telly Awards in 2013 including two silver Telly awards in the News/News Feature and Social Responsibility categories[37] and seven bronze Telly awards.[38]

The Climate Reality Project has also established a partnership with Warren Miller Entertainment called "I Am Pro Snow". The partnership's goal is to explore the impact of climate change on winter sports and locations impacted by changes in temperature.[46]

THE ALLIANCE FOR CLIMATE PROTECTION