Recent medical advances can equip you with new tools to fight against your Parkinsons, and doctors at the Muhammad Ali Parkinson Center can put them in your hands.

Since our doors opened as a regional specialty center in 1962, we have grown into one of the premier destinations in the world for neurology and neurosurgery. Our experienced, highly skilled, and comprehensive team of neurological specialists can provide you with a complete spectrum of care–from diagnosis through outpatient neurorehabilitation–under one roof.

Thanks in no small part to the research conducted at Barrow over the decades, brain and spine surgery no longer means a lengthy hospital stay and hours in an operating room. Our new Barrow Neuroplex will house operative suites tailored for short operations that do not require a hospital stay.

Our team of neurologists, nurses, physical therapists, occupational therapists, and speech-language pathologists is dedicated to providing you with the best clinical care, research, rehabilitation, education, and support. Our demonstrated commitment to these areas has earned us the distinction as a Parkinson’s Foundation Center of Excellence. We are also a world leader in Deep Brain Stimulation (DBS) surgery for the treatment of movement disorders.

We offer a wide range of recreational therapies such as group exercise classes and art workshops to benefit the mind, body, and spirit. Educational workshops and support groups are also available for both people with Parkinson’s disease and their caregivers. Patients and families across the globe have found support through our acclaimed Hispanic Outreach Program.

Barrow Neurological Institute is the world's largest neurological disease treatment and research institution, and is consistently ranked as one of the best neurosurgical training centers in the United States.[1] Founded in 1962, the main campus is located at 350 W. Thomas Road, Phoenix, Arizona.

Barrow Neurological Institute at St. Joseph's Hospital and Medical Center is the world's largest dedicated neurosurgical center and a leader in neurosurgical training, research, and patient care.[2] More operative neurosurgical procedures take place at Barrow than at any other institution in the United States.[2] Under the directorship of Dr. Michael Lawton,[3] the institution's unique capabilities and achievements are recognized internationally.

Barrow was started by Dr. John Green and Dr. Betty Clements as a regional center for patients with neurosurgical issues. It was named after a donation from Clyde Barrow, whose family owned companies including Joy Manufacturing.[4] The institution has rapidly expanded over the last 30 years.[2] Barrow receives referrals from all over the world and is internationally recognized for the treatment of disorders such as cerebrovascular aneurysms, hypothalamic hamartomas and other brain tumors, complex spinal disorders, stroke, and Parkinson's disease at the Muhammad Ali Parkinson Center. The center is home to the largest neurosurgical residency program in the United States, and hundreds of neurosurgeons from around the world visit yearly to attend the Spetzler-Rhoton Skull Base Course and the Barrow Symposium.[5] Dr. Lawton is assisted in his leadership role by Dr. F. David Barranco[6] and Dr. Jeremy Shefner.[7] 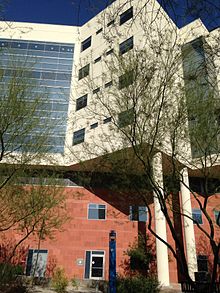 One of Two Neuroscience Towers at Barrow.

Barrow Neurological Institute accepts four residents per year to its neurological surgery residency program, making it the largest program of its kind in the country.[10] Graduates from the program have gone on to chair other neurosurgical programs, head various national neurosurgical societies, and have patented a number of neurosurgical devices.[8] Due to Barrow Neurological Institute's high clinical volume and emphasis on resident education, the center has garnered a reputation for producing technical masters in numerous fields within neurosurgery, and has become one of the most sought after neurosurgical training programs in the world.[2]

In 2019, Doximity ranked the Neurosurgical Residency Program at Barrow Neurological Institute as the #2 training program in the U.S.[1] Additionally, in 2014 Khan et al. performed a comprehensive analysis of the academic productivity of 1225 Neurosurgeons in the United States. The authors found that the Barrow Neurosurgery Department was #2 in terms of overall academic productivity.[12]

In 2018, Barrow Neurological Institute received a $50 million grant from the Ben & Catherine Ivy Foundation in coordination with the Barrow Neurological Foundation to establish the Ivy Brain Tumor Center. This represents the single-largest research grant in the history of brain tumor research, worldwide. The nonprofit translational research program is singularly focused on discovering new therapies for patients with glioblastoma and other aggressive brain tumors through a broad portfolio of pharmacodynamic- and pharmacokinetic-driven clinical trials, combining industry-partnered drug development with the largest operative brain tumor volume in the United States.