With more than 5 million seniors suffering from Alzheimer’s, we advocate for better research, policies, and care.

The Alzheimer’s Association leads the way to end Alzheimer’s and all other dementia — by accelerating global research, driving risk reduction and early detection, and maximizing quality care and support.

We have local chapters across the nation, providing services within each community. Find your chapter.
Our free nationwide 24/7 Helpline (800.272.3900) is staffed by master’s-level clinicians and specialists, providing confidential support and information to all those affected in over 200 languages.
We conduct face-to-face support groups and education programs in communities nationwide, and work to ensure that these services reach underserved populations.
Our online community forum, ALZConnected®, provides a place for people with Alzheimer’s disease and their caregivers to connect with others, share questions, find answers and share opinions with individuals or groups in the Alzheimer’s community.
We provide innovative resources to support those living with Alzheimer’s, such as LiveWell, a suite of online tools to empower those living with the disease.
We provide caregivers and families with comprehensive online resources and information through our Alzheimer’s and Dementia caregiving section, which features sections on early-stage, middle-stage and late-stage caregiving.
Our free online tool, Alzheimer’s Navigator®, helps those facing the disease to determine their needs and develop an action plan.
We make it easy for families to find programs and services using the Alzheimer’s Association & AARP Community Resource Finder, a comprehensive database of dementia and aging-related resources.
We house the Alzheimer’s Association virtual library, a resource center devoted to increasing knowledge about Alzheimer’s disease and other dementias.
We educate and raise awareness to grow understanding
Our education programs for the general public, both online and in person, feature information on topics such as diagnosis, warning signs, communication, living with Alzheimer’s disease and caregiving techniques.
We provide clinicians with the tools to diagnose Alzheimer’s and to educate people with the disease on available therapies and resources.
We educate our nation’s lawmakers on the Alzheimer’s crisis and engage them in our efforts to fight the disease.
Our awareness campaigns explain the difference between Alzheimer’s and typical aging, and the power of early detection.
We accelerate research across the globe
As the largest nonprofit funder of Alzheimer’s research, the Association is committed to accelerating the global progress toward methods of treatments, preventions and ultimately, a cure. Currently, the Association is investing over $208 million in 590 active best-of-field projects in 31 countries. See our Research and Progress section.

Working with the Alzheimer’s Impact Movement (AIM), a separately incorporated advocacy affiliate of the Association, we assemble and train a nationwide network of advocates whose voices are critical in engaging elected officials.
We help pass landmark legislation such as the National Alzheimer’s Project Act, which mandated the creation of a national plan to fight Alzheimer’s and coordinates efforts toward its first goal to prevent and effectively treat the
disease by 2025.
We strengthen the federal government’s commitment to Alzheimer’s research. In 2020, Alzheimer’s and dementia research funding at the National Institutes of Health (NIH) reached $2.8 billion annually. The Alzheimer’s Association, AIM and our advocates have driven bipartisan support for this rapid increase.
We develop resources, including the annual Alzheimer’s Disease Facts and Figures report, to educate decision makers and the public on the economic and emotional toll that Alzheimer’s takes on families and the nation.
We secure quality health care services for those affected. The Alzheimer’s Association, AIM and our advocates championed key provisions in the Older Americans Act to ensure that individuals living with younger-onset dementia, regardless of age, have access to critical care and support services.
Join our cause
Volunteer with the Alzheimer’s Association. Plan an event, facilitate a support group or sign up for another opportunity to advance the cause.
Advocate for those affected by Alzheimer’s and urge legislators to make the disease a national priority.
Participate in Walk to End Alzheimer’s®, the world’s largest event to raise awareness and funds for Alzheimer’s disease care, support and research.
Register for The Longest Day®. On the summer solstice, select any activity you love — or an activity loved by those affected — to help end Alzheimer’s.
Donate to advance vital research and provide care and support programs.
Register for Alzheimer’s Association TrialMatch®, a free, easy-to-use clinical studies matching service that connects individuals with Alzheimer’s, caregivers, healthy volunteers and physicians with current studies.

Jerome H. Stone founded the Alzheimer's Association with the help of several family support groups after meeting with the National Institute on Aging in 1979.[3] Stone's Alzheimer's research efforts began in 1970 when his wife was first diagnosed with the disease. During the 1970s there was very little information available about Alzheimer's disease. Only a few support groups existed at the time. Through his research efforts, he joined with seven independent groups who wanted to form a national organization. The groups consisted of researchers, physicians, caregivers, and other humanitarians. Together they held their first official meeting on December 4, 1979, to discuss solutions for the need for Alzheimer's information, care, and cure for the disease.[4]

The Alzheimer's Disease and Related Disorders Association was incorporated on April 10, 1980. In that year, the National Institutes of Health (NIH) invested $13 million in Alzheimer's disease research. In 1982, President Ronald Reagan designated the first National Alzheimer's Disease Awareness Week. With sub-chapters being founded nationwide, the organization launched its own research programs.[5] 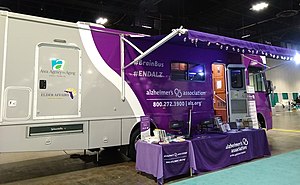 The Alzheimer's Association Brain Bus at the Gasparilla Distance Classic Expo in 2020.

In 1980 actress and dancer Rita Hayworth was diagnosed with Alzheimer's disease, which contributed to her death in 1987 at the age of 68.[6] The public disclosure and discussion of her illness drew international attention to Alzheimer's disease, a disease that had been virtually forgotten by the medical community since its discovery in 1906, and helped to greatly increase public and private funding for Alzheimer's disease research.[7] The Rita Hayworth Gala, a benefit for the Alzheimer's Association, is held annually in Chicago and New York City.[8] The program was founded in May 1985[9] by Princess Yasmin Aga Khan, in honor of her mother.

Started in 1992 by Laurie Burrows Grad in memory of her father writer/director and Pulitzer Prize winner Abe Burrows who died from Alzheimer's disease, A Night at Sardi's was an evening of entertainment that has raised over $28 million for the Alzheimer's Association. The benefit, originally chaired by Burrows Grad and her husband, Peter Grad, was held for the last time on March 9, 2016, and raised over $1.5 million. This 24th and final "A Night at Sardi's" was chaired by Burrows Grad, James Burrows and Nicholas Grad, honoring and paying tribute to Laurie's late husband with the Philanthropy Award.

Blondes vs. Brunettes Powderpuff football games were started by Sara Allen Abbott, whose father, Texas State Representative , died of Alzheimer's disease in 2008. Looking for a way to raise funds for the Alzheimer's Association, Abbott organized a powder puff football game in tribute to her father, a lifelong football fan. The game is now played in 16 cities and Abbott has received national recognition for her efforts in raising over $2 million for the Alzheimer's Association.

The Alzheimer's Association Advocacy Forum is an annual gathering that takes place in the spring in Washington, D.C. The multi-day event includes training sessions, celebrity guests, banquets, multimedia experiences and topical presentations focusing on Alzheimer's disease policy-making and legislation. The feature of the event is a lobby day during which time volunteer attendees conduct meetings with members of Congress on Capitol Hill. Past guest speakers and attendees include Soleil Moon-Frye, David Hyde Pierce, Lisa Genova, political commentators Frank Luntz and Charlie Cook, and members of Congress. 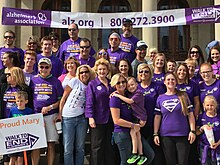 Photo from Walk to End Alzheimer's in Lansing, Michigan.

The Walk to End Alzheimer's is the world's largest event, hosted by The Alzheimer's Association, to bring awareness to Alzheimer's care. This event is held once a year in over 600 communities nationwide, brings together people of different ages, backgrounds and relationships to the disease to join the battle to fight against the disease.[10]

In 2000, the Alzheimer's Association anticipated establishing and running the Alzheimer's Association International Conference (AAIC) and has made improvements in attendance, conceptual submissions and research-based presentations, and media relationships.[11] The purpose of the AAIC is to join researchers together from all around the globe to report and converse about innovative research and data on the source, findings, cure, and prevention of Alzheimer's disease and associated illnesses. The AAIC is held annually and is the world's only largest forum for sharing research regarding the dementia research community.

They accept thousands of abstract submissions and hold more than 2,000 scientific meetings to touch the millions of people affected by Alzheimer's with the use of print newspapers, radio broadcasting, and television newscast exposure. The AAIC has gained news coverage from ABC, the BBC, CBS, CNN, NBC, the Associated Press, Reuters, Good Morning America, The Wall Street Journal, The Washington Post, USA Today, WebMD.com and Forbes.com.[11] Through the customs of the Alzheimer's Association International Conference on Alzheimer's Disease (ICAD), the AAIC attempts to gather authority figures from more than 70 different countries to network and converse the most current dementia research outcomes and ideas in 2018.[12]

During the 2015 and 2016 United States Presidential primary season, AIM supporters pressured each of the candidates for their individual ideas to end Alzheimer's. In the 2016 Presidential Election, AIM and the Alzheimer's Association distributed a national voter survey and results showed that 73 million voters in America knew someone close to them with Alzheimer's disease.[16]