This month our Alumni Spotlight is Morgan Phelps, a graduate of Ola High School (2014) and of Georgia College & State University (2018); she currently works as Marketing and Sales Specialist for Acuity Brands, Inc. In this post, Morgan shares how 21st Century Leaders programs such as Warner Media Institute for Future Leaders played a major role in shaping her career journey! She served as a mentor and alumni roundtable speaker for 21CL’s virtual 2020 Summer Leadership Institutes.

Paint a brief picture of what you are doing now.

Currently residing in the Bay Area as Acuity Brands’ Marketing & Sales Specialist for Acuity’s technology group, I am responsible for driving revenue, executing [outbound and inbound] marketing and sales campaigns, and leading trade shows and networking events. One of our technology brands is BuildingOS. BuildingOS is a SaaS-based platform, modern energy management system measuring, visualizing and reporting energy consumption within buildings. Buildings emit over 30% of greenhouse gas emissions in the United States. Our goal is to reduce energy consumption and emissions within buildings where our clients did not know it was possible by visualizing this data in real-time. In my career thus far, I have organized over 20 trade shows & events, hold a position on the BOMA (Building Owners & Managers Association of San Francisco) Events Committee Board, was a speaker at AASHE (Association for the Advancement of Sustainability in Higher Education) in 2019, am a podcast host and received certification in Sustainable Business Strategy from Harvard Business School. Most recently I have launched a networking group called Women in Sustainability, creating an environment for like-minded women in the Bay Area to come together to share successes, ideas, initiatives and grow a community. My passion is in sustainability and making the world a better place and my role now allows me to share that passion.

How did participating in 21CL transform you and lead you to where you are now?

Participating in 21st Century Leaders helped me gain the confidence and professionalism I needed to pursue the career I have now. From conversational skills to industry knowledge, 21CL helped shape the employee, leader and young professional that I am today. After my summer at 21CL in the Leadership Unplugged Program (WarnerMedia Institute for Future Leaders), I became my high school’s lead news anchor and senior class president- something I would not have had the confidence to do if I was not a part of 21CL. After high school, I stayed in contact with many of my fellow 21CL peers while we all attended different universities. Being emerged with other students that share the same interests and desire a similar career path as you help you build a network that you will have forever. After I received by BA in Rhetoric and minor in Geography from Georgia College & State University, I moved to San Francisco to begin my career and took my 21CL skillset with me. 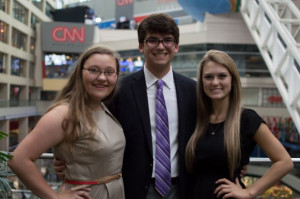 How did 21CL prepare you for your next steps? Going into college and taking on leadership roles, heading into a new era of professionalism, etc. What skills/tools/perspectives have helped you along the way?

Being a part of 21st Century Leaders helped me in my next steps as a young professional in multiple ways. One being the significance of networking. The idea of networking and its importance was not taught to me until I became a part of 21CL. While in workshops as a young leader, the 21CL team showed us how to professionally and correctly network and shared the effectiveness of connecting with people in the long term. Networking helped me get the job I have now and has allowed me to grow my personal brand as well. Another valuable tool 21CL taught me as a young professional was how to speak publicly and professionally. As a junior high school student, I was not exposed to public speaking thus far in my education. As I practiced my public speaking in 21CL, I learned not only how to public speak professionally but three years later chose Rhetoric (the art of persuasion and public speaking) as my major in college. In my career now, I use public speaking every single day whether it be in meetings, speaking to customers and prospects or presenting to groups of students.

Which programs did you participate in, and when? What skills did you gain or improve through those programs?

I was a part of the Leadership Unplugged: A CNN Experience in 2013, which is now known as the WarnerMedia Institute for Future Leaders. As I learned more about the media industry, visited CNN, spoke with media professionals, and practiced working in the media field, I knew I wanted to do something similar for my career. During that program, I learned that the information given to the public and how it is broadcasted is so important. Media has a huge influence on the world and as leaders, we need to relay messages truthfully, professionally and helpfully. Now working in technology, I use this mentality when reaching out to prospects and speaking with customers. Being able to communicate effectively and professionally is a skill everyone should have in the workforce and 21CL helped me learn this as a young professional.

What was a memorable or ‘aha’ moment in 21CL? (Particular program, meeting a professional and diverse peers, speaking in public for the first time, etc.?

One of my favorite moments as a 21CL student was having dinner at the Omni Hotel at the CNN Center in Atlanta while we heard a panel speak and the students ask questions. This panel was the big event of the week and the speakers had big titles like President, VP, CEO, etc. They were very nice, spoke wonderfully and gave great insights into being a successful leader. A lot of the questions they were being asked were around their day-to-day roles and although I was nervous, I decided to ask a very different question. I asked “If you were to tell your high school self you would be in this job today, would you have believed yourself?” Every single one of them answered no. At that moment, as a high school student who had no idea what she wanted to be or even what path she should take for her career, I was happy and relieved to learn that those successful professionals did not know either when they were my age. My aha moment was when I realized that it is ok not to know what your career will be right now, but that if you work hard enough along the way, network and are open to new opportunities, your passion and career will find you.

Did 21CL assist you in developing a leadership style that makes you an effective leader? If so, how? And have you recently learned something else about leadership? Please share!

Absolutely, 21CL helped me in developing a leadership style that makes me an effective leader today. My primary leadership style is inclusion. That is because when I was a 21CL young professional, our mentors asked every single student in the room their opinion and gave every student an opportunity to speak. As a leader, it is crucial to include everyone. This is because every single person has different experiences, histories and passions. So making your team as diverse and inclusive as possible gives you a benefit because you can learn something you did not know before and it can help your team succeed. As a 21st Century Leader I have learned the importance of including diverse people in your group, giving everyone a chance to speak, and always making other people feel welcomed. Being a leader is not success, money or fame. Being a leader is helping people around you succeed and being a positive influence to others. 21CL has helped me be a positive, influential and inclusive leader.