There has been progress for women and girls in Afghanistan since the days when Sajia, a 2009 Afghan Seed and 2020 GATHER Fellow, was growing up in Kabul.

More and more girls are going to school, for one. Women hold positions as judges, police officers, and seats in parliament. The Baale Parwaz Library and Resource Center for Women and Girls, which Sajia had founded in 2016, was expanding to other schools and showing the next generation of Afghan youth a world of possibilities beyond the one they know.

Then on May 8, a bomb was set off at one of those schools, killing at least 85 people, mostly girls ages 7-18, and wounding some 147, and the reality of what that generation is up against came into clear view for all the world to see. 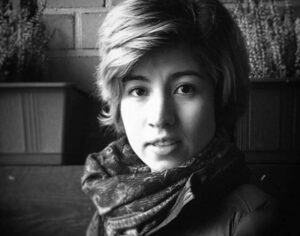 “We are all disheartened, but we must stay strong,” said Sajia.

In response to the attack, Sajia has teamed up with the Afghanistan Fulbright Association to raise funds to support the affected families and provide medical care for those injured.

“We are a team of young Afghan educators and activists working towards a more educated, tolerant, and peaceful Afghanistan. The May 8th attack has brought a different kind of grief to all of us. Most of us are in Kabul and visited the attack site as well as the affected families, who live in a predominately low-income community. The pain inflicted on these families, girls, and the Afghan people in general is tremendous. We want to provide medical relief and financial support to these families,” Sajia and others said in a group statement.

The attack underscores fears that progress made for women in the last 20 years could unravel as the United States withdraws troops from Afghanistan, once again leaving women even more vulnerable to violence and denying them educational opportunities.

The issue is particularly close to Sajia’s heart—as an ambitious, bright youth, she found refuge in books, and a vision of a world beyond the one that she knew. Her mother, in particular, placed a high value on educating her nine daughters, and that education became Sajia’s passport.

She passed a rigorous exam to attend Seeds of Peace Camp when she was 13, and shortly after, she was awarded a scholarship to a high school in Connecticut. Today, is studying at the Stanford Graduate School of Education in California in hopes of affecting change that would improve lives in Afghanistan and beyond, but she has never lost connection with youth in Kabul. The library she established for girls has grown to several locations across Kabul, offering myriad programs and literacy classes for hundreds of female teachers, students and community members on a daily basis.

Educating girls, Sajia said, is an essential step toward bringing peace and stability to Afghanistan, and to go back now would not only be devastating for women, but also for the future of the country.

“Education is the only gateway to change,” she said. “Afghan girls are perseverant and ambitious. They are more aware of their rights. But to win the fight, we have to support them. My plea to the international community and the Afghan community abroad is to invest in Afghanistan’s human capital because without a knowledgeable and skillful population, change would be much harder.

“We have come so far, we cannot and will not give up now.”